An alumnus of Presidency College, Calcutta – A gold medalist in M.A. (Political Science) from Calcutta University, had an outstanding academic career throughout. A Ph.d. in International Relations. Attended courses in almost all leading Training Institutions of India. Studied in York University, UK. and London School of Hygiene and Tropical Medicine.

He has nearly Four decades long experience in administration including more than a decade of field experience in the Districts and Divisions in various capacities from Sub Divisional Officer to Divisional Commissioner. Held charges of several major departments of the Government. Superannuated in 2005 on the rank of Chief Secretary. A Fellow of World Health Organization – also did a stint with UNICEF as a Social Policy Advisor. Held the post of Chairman, Electricity Regulatory Commission of Madhya Pradesh till January 2010.

Widely travelled within the country and abroad.

A keen follower of sporting events. Used to play tennis till the age of 70. 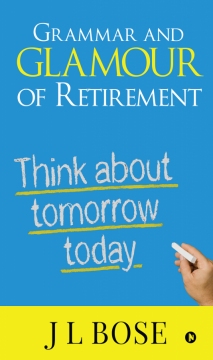 Grammar and Glamour of Retirement

This book intends to forewarn and forearm all, irrespective of their financial status and lifestyle orientation so that when retirement comes, they are in complete readiness. It seeks to elucidate the full import and meaning of retirement. Retirement is an ever-evolving concept. Some think it is the end of life; for others, it is the beginning. In fact, life is a continuum and retirement is only a phase of life. Needless to say, retirement is an elusive, ever-

The book has also dealt with issues :-

(a)    Why should retirement be welcomed?

(b)    How can retirement be used effectively and efficiently?

(c)    Can a retiree’s experiences gained from real life situations be utilized?

(d)   How can one overpower the fear of retirement?

(e)    Who should be the ultimate decider of retirement age?

How two poles apart words – Grammar and Glamour be blended and a bonding created to make retirement successful, happy and enjoyable?