Childhood enriched in the rich cultural Maithili environment, listening to the mantra of the father, he reached his teens. It was then that he picked up this flavour of writing and learning.

He effortlessly inherited Sanskrit, Hindi and Maithili literature with pride from his paternal background.  Behind his notebooks and classroom desks his poems were carved and in those days the Camlin pens lay the foundation of his writing journey. His poems saw its imprints also in the silver foils of cigarettes while travelling in trains.

Then he also like any of us lost his way to the daily chores of life.

Finally, all those poetic moments from childhood to adulthood is finally captured into its first book “Aao Jeena Jeena Khele” which inspires everybody to celebrate every moment in your life because its worth it!

This book speaks in volumes about the duty of living your life to fullest because its your responsibility.

Somewhere in the race to pick up speed and match the standards of the societal respect and match to the expectations of the people around, we tend to forget to live “life” in the truest sense.

Through this book , the author wishes to invite all the readers of this book , to reinvent their life and pull up the socks to live it once more.

Life shouldn’t be  filled with too many  “what if… Never mind next time…” moments.

He has captured some of the very beautiful moments of life  in a poetic form and the beauty of this book is that it will touch anybody who reads it, because it connects to any one irrespective of age groups.

The Poet, Sujeet Jha , was Born in Madhubani in the year 1971. He did his schooling from St.Xaviers college Ranchi and is also a proud alumini (who has a graduate degree in Sanskrit Literature ) of Hindu College , Delhi University . He also holds a Post Graduate Degree in Business Administration from IMT Ghaziabad. 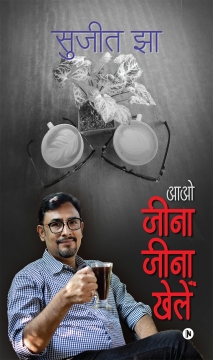