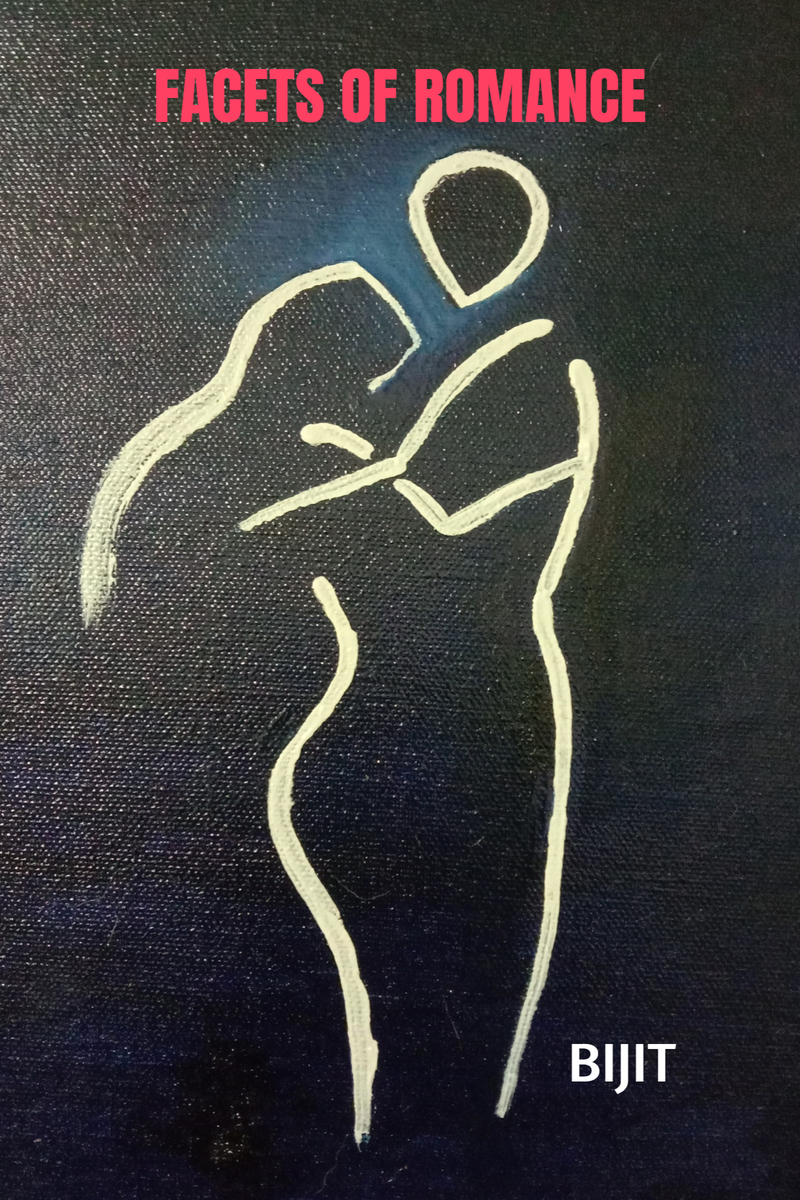 An anthology of romance stories that explore relationships in different shades of love. Paths of love could be different but it is a renaissance of wonder that thrills our souls and makes us complete. We all fall in love some way or the other. A few touching stories from everyday life ...

It was one of those days when you wake up from an unfinished dream about a beautiful past and wished you had the chance to go back in time to relive those cherished moments. Neel tried to rewind his memories. It had been only five years and so much had changed in his life. He had made so many mistakes along the way just like everybody does in the timeline of life. Whatever the relationship was, he was madly in love with this girl with big black eyes and curly tresses. She looked even more amazing every time she flipped her hair and smiled her enchanting smile. She was a bubbly girl who simply could not stop talking. So many times he just smiled and watched her talk - her words fell on deaf ears but the aura of so much life filled his soul with succour. Her name was Ria.

Neel sipped his tea in the college canteen as most of his friends were fooling around and taunting him of what had transpired a moment back. He was so desperate that he had gone down on his knees before his classmate Ria and tried to propose her in the middle of the canteen. Ria was not prepared for the sudden moment; she gave him a tight slap and huffed out of the canteen. The entire canteen roared with laughter. Neel wanted to disappear into thin air. He had no idea what went wrong. They were good friends and they even had lunch together in the canteen and he was so confident that she had feelings for him. Only Bhakta, the canteen manager had pity on him and gave him a cup of tea and patted his shoulder gently.

“Stop laughing,” said Poorvi. She was one of those who believed there was something going on between the two. In fact, it was her idea that he should confess his feelings, although she had no idea that it would be done in such a dramatic way. Gradually, the laughter changed into words of consolation. Neel took as much advice as he could stand and finally ran out of the canteen.

It was the last class of the day. Professor Roy was surprised to see Neel attend his Control Theory class as he was one of those students who were generally found in the table tennis room during his boring lectures. Ria was sitting in front of Neel asking all sorts of questions to the professor. Neel neither understood the answers, nor the questions. Neel glanced at his watch impatiently and waited for the class to finish. He must talk to Ria. Finally, he ran out of patience and scribbled something on a piece of paper. Poorvi was sitting with Ria. He passed the paper to Poorvi and gestured her to give it to Ria. To his relief, Ria accepted the note. However, she did not open till the class was over. It obviously read, “Why did you slap me? I thought you were my best friend.” Ria looked at Neel. Neel was waiting for Ria not sure whether to accost her or not. It was Ria who walked up to him. She was not her usual self. She was usually a bubbly and talkative girl. “Sorry,” she said. “It was spontaneous. I felt embarrassed. I never thought of our relationship beyond friendship.” Ria left quickly and made her way out through a crowd of chattering students. Neel leaned on the wall of the corridor and saw Ria disappear into the maddening crowd.

Neel was smoking in the games room of the hostel. He was playing his worst game of carrom. Sam, his roommate, was on the other side and thankfully hit the queen in the pocket with a clean rebound to end the miserable game. Sam took the cigarette from Neel and took a long drag. “Don’t waste your time on her. She enjoys the fact that boys like her and she likes to flirt. Don’t fall into her trap. You have better things to do in life. Our hostel football championship is coming up. You are the captain of the Titans.”

“I just can’t get her out of my head,” said Neel. He took the cigarette from Sam and took the last drag as the puff disappeared outside the window.

“Come. I’ll show you something,” said Sam. Sam led him up the flight of stairs. The roof of the seven-floor hostel was usually off-limits but there was some construction work going on. There was a guard at the entrance of the roof. Sam slid a small bottle of cheap rum into his pocket. Sam put his hands around Neel’s shoulder and walked into what looked like heaven to him. The streetlights just came to life in the backdrop of the setting sun. The road down below curved and looked like a necklace adorning the city of Kolkata. Neel smiled and patted Sam. “Thanks, buddy. I feel much better now. Life is larger than what I used to think,” said Neel.

It was the era before cell phones. None of the students had cell phones. There was only one common telephone on the ground floor which was only for receiving phone calls. The guard would call out the name of the student three times at the top of his voice. The student needed to respond and come rushing down to attend the call. “Neel, telephone,” called out the guard. Neel was in the bathroom. Sam responded on his behalf and banged on the bathroom door. Neel rushed out of the bathroom wrapped in a towel and ran towards the telephone.

“There is something I wanted you to know,” said Poorvi.

“Ria’s mother had a mild heart attack yesterday and the doctor said that she needs to be careful from now on. I called Ria after college and she broke down while talking to me.”

“I see,” Neel was confused as usual and was not sure how to react. “I mean, I am sorry to hear that.”

“What what! Aren’t you missing something?” Right at that moment, he felt a tug at his waist and his towel was gone!

Neel was in a sticky situation. “You said I missed something. What did I miss?” asked Neel trying hard to concentrate on the call while the miscreants were mocking at him.

“Meet me at the college gate in half an hour,” Poorvi hung up.

As Poorvi made her way from the girls’ hostel to the college gate, she met Neel on the way. He was still fastening his buttons when he ran into Poorvi.

“I hope you understand where we are headed?” said Poorvi in a frustrated voice as they both headed to the college gate.

“Guess! You are so incorrigible. You really deserved the slap,” taunted Poorvi.

“I do understand. Ria is perturbed as her mother is not well,” said Neel. Poorvi nodded.

Ria was a day scholar and considered herself one of the unlucky few who lived close to the college and never got a chance to experience hostel life. She envied the independent life of a hosteller. She belonged to an ordinary middle-class family. Her father was a pensioner and her younger brother was autistic. Ria did tuitions to earn whatever she could for the family. They could somehow make ends meet.

Poorvi had come to Ria’s place several times before, but it would be the very first time for Neel. Having spent almost two years in college, Neel had always seen Ria as a carefree and ever-smiling girl. He listened patiently as Poorvi told him about Ria’s family while the bus moved towards their destination. Neel paid the stipulated half fare for both of them after displaying their student IDs. As they alighted down the steps, Neel saw a speeding bike coming from the wrong side and he pulled Poorvi to one side. The bike and the bus both left with a trail of dense smoke that obscured the surroundings of the busy metro with people running helter-skelter in an eternal ocean of confusion. Neel and Poorvi took a minor detour to the florist before reaching a shabby building.

“For you,” said Neel as Ria opened the door. Ria looked at Poorvi and smiled and then looked at Neel holding a bunch of red roses.

Neel quickly corrected himself and said, “I mean...it is for your mother.”

Ria smiled and ushered them into what was a small living-cum-dining room. It may be small but it was neatly decorated with bright handmade wall hangings and paintings.

“Come,” said Ria as she led Neel and Poorvi to their only bedroom. The bedroom was currently occupied by a very thin middle aged woman. She was ailing but managed a faint smile to welcome her visitors. Neel handed her the roses.

“You will get well soon, aunty,” said Neel as he touched her feet. She took the flowers and closed her eyes to enjoy the fragrance. She managed a weak smile and put her hand on his head to bless him.

Poorvi held her hand and said, “When are you making nimki (a snack)?”

Ria’s mother smiled at Poorvi and said, “As soon as I get out of this bed dear.” After a pause, she said, “Why don’t you all go to the roof to get some fresh air?”

Ria’s father was not home and her brother was busy with some toys on the floor of the bedroom. Neel walked up to him and shook hands with him. Ria’s brother smiled for a moment but soon became busy with whatever he was doing. The three friends made their way to the roof.