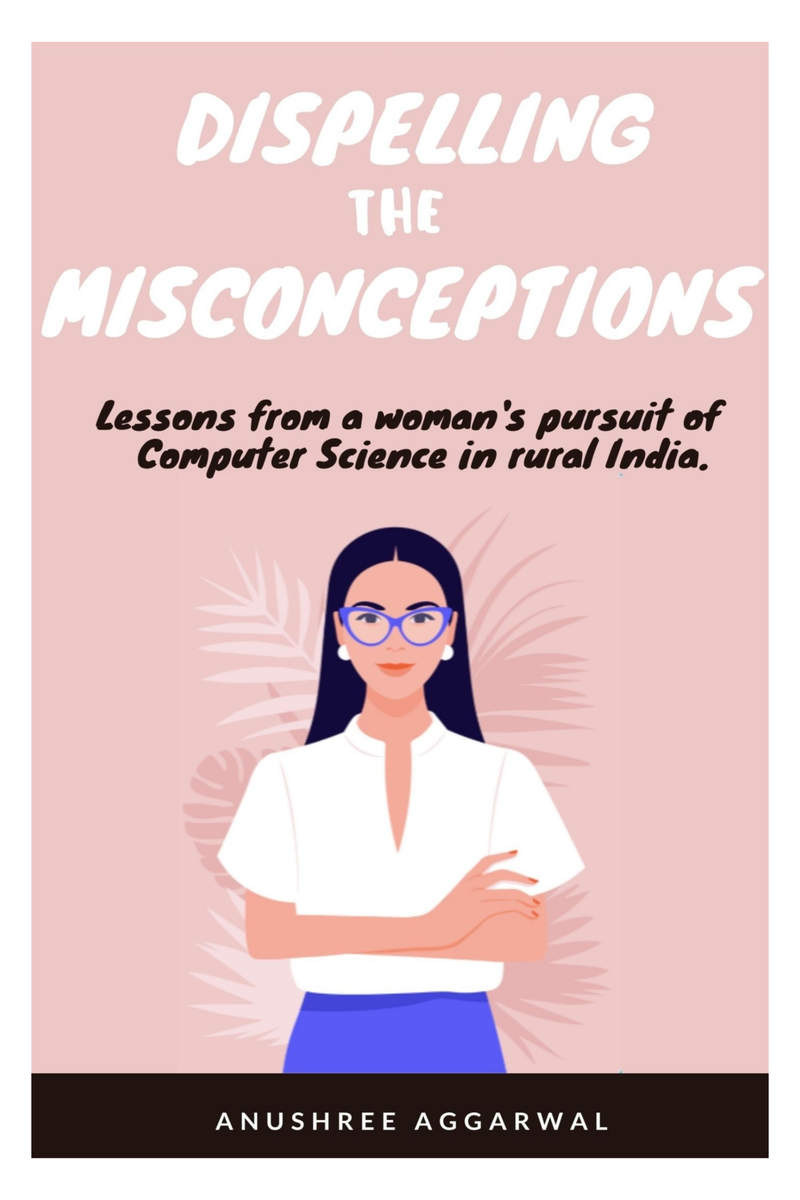 Dispelling the Misconceptions is an account of the deeply personal recocking of a girl’s journey to becoming a computer scientist in rural India. The book tells the story of a young woman who steadily dispels the misconceptions that Computer Science is not a career path for women by becoming an ardent Computer Scientist, inspiring a whole generation of young adults like us to do the same.  Over the years, the gender gap in computer sc....

Just like Princess Diana of Themyscira, once lived an 11-year-old girl called Martha in Peren, India. Now if you are a DC fan, which I sincerely hope you are, you must know who Princess Diana of Themyscira was. However, in case youx do not (which even I did not know until recently), she was the Wonder Woman who lived on an isolated island of Themyscira, where only women lived. Just like Princess Diana, Martha had never been exposed to the ‘male-dominated world’ of ours. For her, an ideal world consisted only of women and like any other woman, she was brought up to believe the concept of ‘ an ideal woman’ Our society has a set of ideas about how we expect men and women to dress, behave, and present themselves.

Themyscira- The wonderland for women

Princess Diana of Themyscira- the Wonder Woman herself

Now in case you are unaware, which I highly doubt, let me elucidate you on what ‘gender roles’ mean. Gender roles in society mean how we’re expected to act, speak, dress, groom, and conduct ourselves based upon our assigned gender. For example, girls and women are generally expected to dress in typically feminine ways and be polite, accommodating, and nurturing. Men are generally expected to be strong, aggressive, and bold. Every society, ethnic group, and culture has gender role expectations, but they can be very different for different cultural groups. They can also change in the same society over time. For example, pink used to be considered a masculine color in the U.S. while blue was considered feminine. (shocking right?)

Hypermasculinity is perhaps just the exaggeration of stereotyped behavior that’s believed to be masculine. Hypermasculine folks exaggerate the qualities they believe to be masculine. They believe they’re supposed to compete with other men and dominate feminine folks by being aggressive, worldly, sexually experienced, insensitive, physically imposing, ambitious, and demanding.

These exaggerated gender stereotypes can make relationships between people difficult. Hyperfeminine folks are more likely to endure physical and emotional abuse from their partners.

However thankfully, our society is in a constant flux of change, and many people, reformers, and activists are trying to grow past the misogynist beliefs of history. The battle against female rights turned into a long-standing war still being fought to-date. Therefore, to say that the disparity has been demolished would be highly misleading and false. In fact, it is talked about so much that many people associate a negative connotation to it and consider it cliche.

A lot of folks consider ‘feminism’ to be a term, which in reality is a whole huge concept on which our whole society has been balanced. Since the very day, Eve left the garden of Eden, the discrepancy has been on. Many people have coined their own meanings for ‘feminism’ drifting from its very essence. So, let me take this opportunity to clarify its meaning. Feminism is a range of social movements, political movements, and ideologies that aim to define, establish, and achieve the political, economic, personal, and social equality of the sexes. Feminism incorporates the position that societies prioritize the male point of view, and that women are treated unjustly within those societies. Efforts to change that include fighting against gender stereotypes and establishing educational, professional, and interpersonal opportunities and outcomes for women that are equal to those for men.

Now, nowhere does it state ‘providing women with more rights’ or ‘decreasing the rights of men’, it only states ‘establishing equal rights for both men and women’. That sounds fair, right? IT IS.

So is the disparity or the fight for equality in equal proportions everywhere? Even though patriarchy, misogyny, male-chauvinism, whatever you like to call it, is a global phenomenon common to each and every, yes to all 195 countries, it varies among different ethnic groups, countries, cultures, families, even according to income levels.

According to the intellects of our world money is considered to be the building block of life, so anyone with a deficiency of it is basically doomed for life. It is well stated and surprisingly understood that money gives power, sustenance, health, and lifestyle, but, as astonishing as it is going to sound, money also gives equality. It doesn’t mean that rich people experience equality because that’s not true at all (well we’ll talk about that a little later), it only means that poor people suffer through the much worse aspect of inequality.

Martha belonged to a lower-middle-class family on the realms of being below the poverty line. Also, to make matters worse, she lived in North-East India, unequivocally the most beautiful yet the most isolated region of India.

Now let’s draw our attention towards North-East India for a moment, so that we can explore the reason that made her journey even more challenging.

Well, these are the first three lines of the Wikipedia page for Northeast India. The first impression is the last one and when I read this I don’t picture a majestic beauty with heavenly aesthetics and that is what North East India is right? Arunachal Pradesh with its first sunrise in the country, Assam with its haven for One Horn Rhinoceros, Manipur with its natural jewel beauty, Meghalaya with its matriarchal society, Mizoram with its Pukzing Cave, Nagaland with its world’s largest guitar ensemble, and finally Tripura with its only floating palace. Now, this is what defines the real Northeast, not its 5,182 km long borders, right? Wrong Again!

‘Tourism’ is the trademark of this region. However, despite having all the possible resources, correction natural resources, the eight states combined together makeup to only about 2.5% of India’s GDP. Also, if tourism is the trademark then why 19 out of every 20 people have not visited these regions? Every year, there are more than 17.42 million visitors in Incredible India, but not more than 9.5k of these tourists visit Northeast India. Why is it that even after having all the desirable qualities, it is still lagging behind?

People fear the Northeast: the lack of infrastructure, security issues, transportation, and sadly the difference in opinions and beliefs harnesses a shield of fear and consternation around this untouched beauty. In recent years, Indians have grown to isolate these regions so much that the truth underlying them has never been chartered.

The quality I would particularly underscore about Martha and her community is their strong belief that ‘a star never shines alone in the sky’. They believe that one rises by lifting others. If you meet a northeastern woman and she has one bowl of rice in her hands, she will first ask you if you have had food, and if you say no, she would not even stop to consider that by giving you the food she will be left hungry. This is not dumb, this is what a leader does. They are the living embodiment of Mother Teressa, who taught us that “It is not about how much you do, but how much love you put into what you do”. She taught us that peace begins with a smile and we rise by lifting others. Mother Teresa died in North East India, rendering service, love, and hope to countless humans. She sacrificed her life to teach us to live in a world of peace, love, and humanity.

Inspired by Mr. Stev Jobs, every day these women wake up and look in front of the mirror and ask themselves one small question, “if it were the last day of my life, would I do what I was about to do today? And if the answer is ‘no’ for many days in a row, then you know that something is wrong in your life, and you have to change it”

Therefore, unafraid of the efforts, consequences, and challenges, Martha began her journey with an unerring intellectual curiosity and a pursuit for happiness.

Now, in this chapter, we are going to talk about the infamous Maria Ursula. Trust me if you are wearing socks right nowAll-day long for 24 hours for 14 years, Maria Ursula disguised as a man under the name Balthazar Cardoso to fight in the Portuguese Navy in Goa. The only way for her to survive in a then male-dominated Portuguese occupied India was to hide her identity in the shadow of a man. No one could know that a woman dressed as a man was fighting in the army. Every day with the armor and disguise on, she was not only fighting for her country but also for her life. However, not succumbing to the adventures of cavalry and crusades that were ‘forbidden’ for a woman, she was eventually promoted to the Corporal. As Balthazar’s honor and prestige in Goa grew, Maria’s identity shrunk through the ranks until in 1714 after 14 years of hiding, she finally revealed herself. Her capabilities to fight in the army were not defined by the mere difference of her gender.