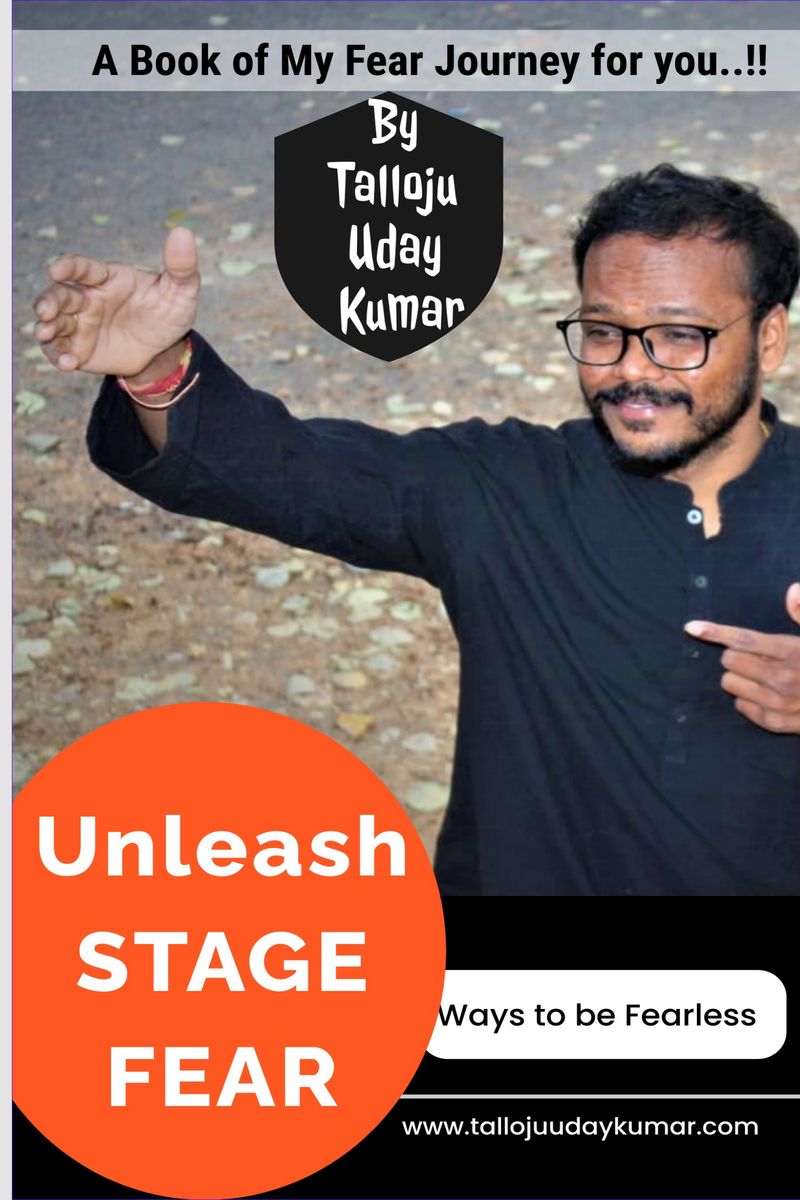 The Best way to show my gratitude to the people who played a major role in my life which might be consciously or unconsciously Obviously this book is to say thank you to all my well-wishers who helped me in my fear journey to become fearless, which helped me to organize and to be calm, composed and relax in every event of the life. Whenever I learn a new thing or new skill from any person or from any event I will treat them as "my teacher" and I....

Since childhood, I have this fear of the stage and I have faced a lot of challenges in my life, at times I have missed many opportunities in day-to-day life the main reason is that I cannot talk effectively in front of people due to this fear. Last few years working on my skills at the same time identified that we have only two types of stage fears External Fear or Visible Fear and Internal Fear or Invisible Fear.

1. They will "Prepare" the speech whatever they want to prepare they will be preparing the first step would be to prepare.
2. They will understand about the "Content" what kind of content they need to prepare number one prepare and number two work on their content
3. They’ll gather everything and form as a "Speech"
4. Which is more important you need to "Know who is Your Audience"

Because without knowing your audience you cannot speak yes, of course, you can speak but there could be huge variation for example, if you are giving a speech in medical college, will you prepare a story from an electrical engineer or a medicine-related or a doctor related story?

What I strongly believe is you need to know your audience which is the heart of your preparation, which is the heart of your talk. If you have these four things "Preparation", "Content" and you’re ready with your "Speech" final "You need to know about your Audience" then you will be having a huge scope but to achieve anything in your life, anything in your life especially to kill your stage fear and talk effectively in front of people you need to remember this three P-P-P, 3P’s are enough to talk effectively in front of people

You are "KING" at that point, you are king you need to talk whatever you want which is related to that audience by which audience can take action from your speech. If you agree with me how many "P’s" you will be doing in your life for any speech or talk

Now, which kind of Practice you will be doing, if you have these three P’s then definitely, I believe you have a huge scope of killing your fear,

Killing your fear whatever might be the fear not only in speaking.

Whatever it might be, any skill or any sport if you have practice then you can rock and you will be “KING” for that particular skill!!

What is the best lesson I’ve learned as a trainer?

One of the best things I have learned as a trainer is “saying NO” but you might be thinking of saying no to what? saying no for what? I don’t know What does it mean?

Let’s take an example if you ask me about the skill which I have learned, I can easily train you because I know the pain behind it. I know the struggle behind it because I have spent a huge amount of time, money, and resources to acquire that skill, but if you ask anything which I have not learned, then just a few years ago, I may not say no I’ll say yes even if I don’t know the answer reason I have fear of saying “no”, but every question I used to say, yes, I can, I will but the moment I realized the importance of no, I have stopped saying "NO".

Let’s take an example. I never played the guitar if you’re asking something what’s the note of XYZ, I might say you can play like this, then I’m unnecessarily misleading you because I don’t know that skill. I never touched a guitar in my life but when it comes to suggestions, yes, I have given because I don’t know how to say no.

What’s the importance of No? I just realized two years ago, at the end of 2018, I have realized the importance of saying no the moment I have learned saying no, but not for all the scenarios wherever it is not related to my skill, which I have not traveled in my life, which I have not faced in my life, I will say no Whatever am expert or whatever I have learned, whatever I have trained, trained on it, I will give my suggestions, I will give my beliefs on it, I give my perspective on it, that’s for sure.

Saying no is very painful to adopt it initially because it needs huge guts. Initially, I don’t have that slowly I have built that to say no, were needed because training is not something which we need to deliver continuously if someone asks any question, which is out of the syllabus, out of the box, you don’t know, don’t blindly answer it, just mention a common statement that’s an interesting question, by the way, I don’t know that, that’s a new question for me you need to be genuine to the anyone who you’re talking, whether it might be your family or your colleague.

Remember one thing, the moment you build genuine within you the same thing will replicate or portray to the audience or the people around you but if you hide something if you hide because I’ll focus on yourself itself, yourself is the key to success or to achieve anything, believe in yourself, trust in yourself, build confidence in yourself, boost up yourself where everything is related to yourself. If you are the person who does everything appropriately, then you will be somewhere not only this skill, whatever might be the skill if you learn with passion if you learn with certain commitments, and definitely, you will be somewhere but if you are the person, don’t know what to do, how to do but just for namesake, you’re doing it. It may not work because self-confidence plays a major role throughout your life. Just imagine that in every situation, wherever you want to tell you can talk confidently when you have a belief and confidence within you just learn towards it.

Before 2018 and I'm into the same impression where you are but once I have learned this and I have adopted it and I have succeeded. A huge amount of differences, before learning those skills, after learning those skills. Which completely changed my life. I guarantee you that it will change your life as well if you focus if you practice. Let’s focus...!!!
“Don’t stop learning irrespective of your age”