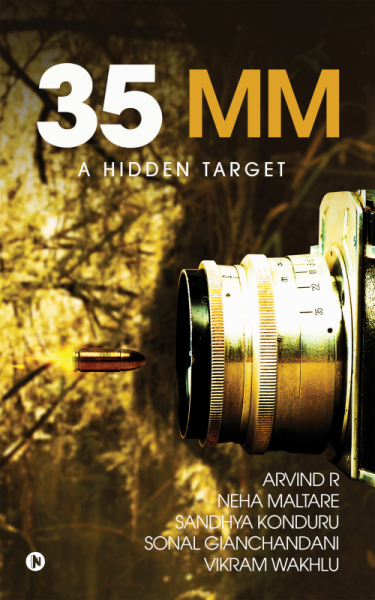 Five authors and one story is what make this novel unique. This is a story of four strangers who are brought together by life… or at least that is what some of them think.

Based in the beautiful North-East India, this is the story about the quest of four individuals who are all running from something in their lives and their hunger to find themselves. Be it breaking from the stereotype of our society, running from the darkness within or accepting oneself. The journey however is not without its own dangers, turning their seemingly straight forward quest of self-discovery into a battle of survival. From photography to danger, Aashna, Advait, Charu and Dr. Ashok may have been handed more than they bargained for.

The five authors of “35 MM – A Hidden Target” have generously dedicated entire royalty proceeds of this novel to the cause of healthcare of disadvantaged children in the country. Royalty amount will be donated to the NGO “Sankalp India Foundation” (www.sankalpindia.net)

Arvind works as a senior analyst in a leading financial institution. He has a Bachelor's degree in banking and insurance from SIES College, Mumbai and an MBA from IBS Bangalore. Other than reading books and entering into arguments as a sport, his favourite hobbies include playing PC games, watching anime and fighting an internal battle against procrastination, to write his blog and his own novel, which he is currently losing.

Neha is an MBA-Finance, Investment banking professional and a ‘too much into the work’ person who possesses two conflicting interests- outdoor activities and reading.

She is an avid traveller and an outdoorsy person who enjoys almost every activity under the sun. At the same time, she is an ardent reader, who as a kid, spent all her summer vacation afternoons reading anything and everything which was available in the only library in town.

She enjoys the occasional indulgence in writing and pens down her travel experiences whenever she feels like. But this book is her first attempt to write something out of her imagination and this is when she realized, how wicked it can be at times.

Sandhya Konduru, originally from united Andhra Pradesh is an MBA graduate, a cost accountant, a banker and now trying to be a novelist by destiny. Sandhya loves travelling, photography and playing violin.

Her hobbies also include painting and seeing through people and their lives which she strives to accomplish through her travel adventures.

Describing her own life as a collection of small stories she wishes to pursue writing as a vocation in the near and distant future.

Sonal Gianchandani, hailing from Delhi, is currently residing in the Pink City –Jaipur and has been working with Deutsche bank for the past five Years.

He has a Bachelor’s Degree in commerce and a Post Graduation Diploma in Advertising and marketing. Having creative writing as a subject during graduation, he developed some writing flair and has been writing random blogs about music and lifestyle since then. A midnight poet, a talkative introvert, a football and an electronic music aficionado and now a novel writer by chance, Sonal is probably the best chicken eater in the world and he also produces electronic music in his spare time, like for real!

Vikram is an engineer from the University of Pune and did his MBA from NITIE, Mumbai. He likes to listen to, perform and compose music, dabble in the fine arts, cook, trek, write and read when not at his job as a Financial Services Consultant with one of the Big 4. While he maintains a blog@ http://poetry-prose-and-more.blogspot.in, this is his first attempt at collaboratively writing a novel.