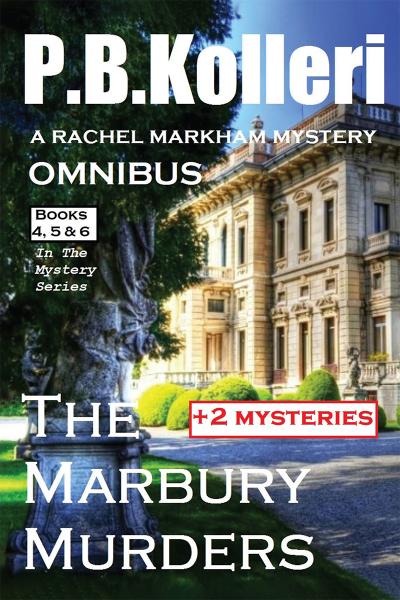 A Rachel Markham Mystery Books 4, 5 and 6

BOOK 4: THE SANTINELLI CASE – Set in the winter of 1947, in the exciting world of post-war Paris; Rachel and Jeremy are called upon to investigate the sensational murder of Countess Santinelli. Their quest leads them from the charming avant-garde streets of fashionable Paris and the gilded rooms of the Ritz and Maxim’s to the dingy by-lanes of Montmartre - a place that offers refuge to exiles from fascist Europe, artists, revolutionaries, musicians, heroes of the resistance, et al. Rachel and Jeremy find themselves aiding the Sûreté to pursue a devious killer within the city’s big beating heart, setting the stage for a mesmerising tale of mystery.

BOOK 5: THE MARBURY MURDERS - Set in the dawn of 1948, in one of the grandest aristocratic homes of England; Rachel and Jeremy are invited by the Countess of Marbury to unravel the plot behind Lord Marbury’s attempted murder. Amidst the glitter and glamour of the aristocratic jet-setting circle, they must race against time to catch a devious and manipulative member of the lavish house party, who has murder on the mind. The dramatis personae include a celebrated Italian soprano, a Baron with a penchant for intrigue, an African game hunter, an heir to the Earldom with a gambler’s heart and a woman with a mysterious past in Kenya.

BOOK 6: DEATH AT FERNSIDE – Set in the summer of 1948, in the enchantingly beautiful Lake District of England; Rachel and Jeremy are invited by Rosemary, better known as Lady Woolton - an aging aristocratic acquaintance, to attend a celebration for her 83rd birthday party. Their journey to the scenic Lake District throws them into a web of murder, mayhem and deceit, to finally unravel an unsolved murder committed twenty years ago.