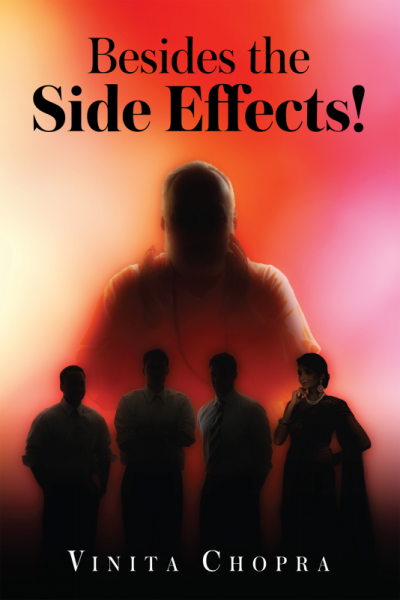 Besides the Side Effects

The story revolves around the lives of three officers of the taxation department, different from each other in their attributes, attitudes and styles. While Jain is a winner all the way, Srivastav lets the ephemeral power slip from his hands under the slightest of threats he faces. Prabhat Verma, inadvertently, creates history through his conscientious actions.

‘It is a criss-cross of favours, transactions and deals, manipulations and adjustments, give and take, which take place under Swami ji’s patronage.’ Did Swami ji perform a miracle or was it just a coincidence? The money earned through scams, frauds, bribes, extortion, cheating, grabbing and by whatever name called, the tainted money, the money of the tainted, was getting converted into legitimate money.

Ms Vinita Chopra belongs to the 1975 batch of the Indian Revenue Service. She retired from the post of Director General of Income Tax in August, 2009.

She had graduated from the renowned School of Planning and Architecture, New Delhi. But with the vision of a larger canvas to write her role on, she joined one of the premier Civil Services of the country.

During the course of her 34 years long journey through the Service, the insight she developed and the knowledge she gained are finding expression in her writings.

Her debut book titled ‘They May Catch You! – All about Income Tax Investigations, Searches and Surveys’, in the non-fiction category, was published by M/s Vision Books in 2012. The book, which was aimed at sensitising and educating the lay public, and demystifying income tax investigations, has been well received.

‘Besides the Side Effects!’, her second book, a novel, presents the readers with some interesting episodes from the lives and travails of officers of the taxation department. The endeavours of an officer result in unravelling of a financial fraud being perpetrated on poor farmers, which in turn, leads to the discovery of an unholy nexus between the political, bureaucratic set-up and the pseudo-spiritual culture of the present day times. Various dimensions of ‘black money’ and ‘corruption’ occupy a critical place in the story.