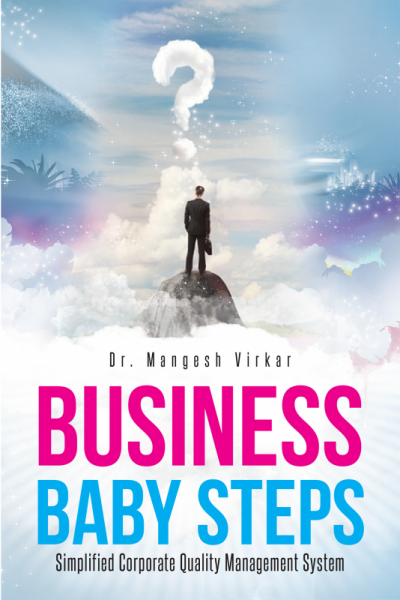 BUSINESS BABY STEPS has everything you need to establish your business, and to ensure that it sustains itself in a dynamic mode. To start a business is easy, initially investment is easier, but it becomes very tough to sustain a business in this dynamic market. Business giants differ from small businesses because they keep working on the BASICS of BUSINESS. The execution is always in the form of BABY STEPS. Every step is put forward with a lot of thought, anticipation, creativity and confidence. This book is a milestone in the history of business books. It concentrates on COMPLEX BUSINESS CONCEPTS that have been made VERY EASY for each and every man or woman who dreams of being a BIG BUSINESSMAN/WOMAN with SUSTAINABLE QUALITY PRACTICES.

With must-read business basics through Quality Management System Perspective and a superb induction reference for new employees of businesses of all sizes, this is the book for you if you are:

-A STUDENT from ANY FACULTY and STREAM

-An Employee dreaming to be an EMPLOYER

-A FATHER who wants his SON to be a BUSINESSMAN, or a proprietor of a NEW SMALL BUSINESS

-ANY LEADER who wants PROGRESS for his Organisation

Dr Virkar Mangesh has many passions, such as pathology, sports, face reading, psychology, oration and software. After a stormy one-and-a-half years of running in his Pathology laboratory, he found himself caught between ‘patient delight’ and ‘doctor’s delight’. This state of affairs fueled him to change his orbit from private medical practices to the corporate world, in March 2008, as a Pathology Manager in Mumbai.

He devoted himself to international audits and high-end quality practices. He was the youngest pathologist of India who spearheaded the College of American Pathologists International Audit in 2007. Despite several misfortunes in his private life, Dr Mangesh kept fighting against adversity to achieve success until he got an offer to work for a stem cell bank. He was the youngest Medical Director in the innovative business of stem cell cord blood bank for more than three years. Over those three years, the stem cell bank became one of the most accredited organisations, fetching more than five national and international accreditations (NABL, CAP, ISO 9001 2008, AABB, cGMP and so on).

Now he is the Lab Director and General Manager of a multinational company in Chennai. He always believes that until an organisation is ready for challenges, progress is not possible. Each new product needs small but essential baby steps to make it a BRAND.

The desire to simplify complex corporate work style paved the way for his first book, which took three years be completed. He recommends that everybody read this book if they want to progress in the competitive business environment – whether as an employee or employer.