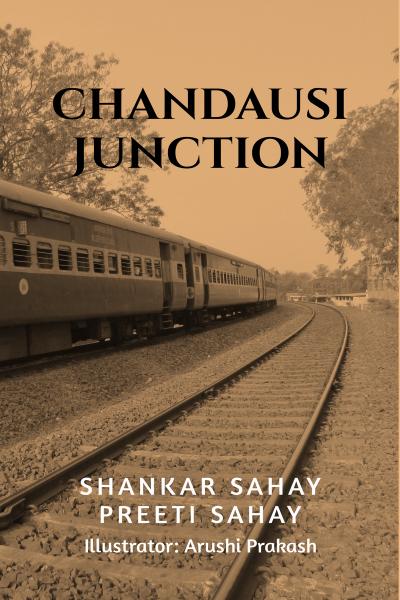 A collection of short-stories set in the

20th Century India for the

& a nostalgic walk, for their parents & grandparents.

Although this book has been named after the city of Chandausi, it contains stories from various places like Rishikesh, Agra, Champaran, Tilhar, Sambhal, Kanpur, Banaras, Lucknow and many others. These are the short stories of a bygone era-a period when India had either not gained independence or had been independent for not more than 35 years. These are the tales of journeys-taken up from the early 20th century to the end of a millennium, from Shahjahanpur to Delhi, from Bijnor to Hyderabad, from Hathras to Sweden & Norway, from Lakshmi Talkies, Allahabad to Night Watchman, Bangalore, from Panki to USA, from Dehradun to Canada, from Chandausi to Australia and many others. We are sure in all these stories, you will be able to find at least one character, which reminds you of your own self-of what you are, were or always wanted to be. Let us know the character with whom you have been able to relate to the most.

“Genius is one percent inspiration and 99 percent perspiration,”-Thomas A. Edison.

-Here’s a collection of short stories to inspire the readers.

Shankar Sahay has over 30 years of experience with Education, Training & the Corporate world. He has been associated with renowned organizations and institutes as Career Counsellor and Mentor and addressed the students & faculty members on various topics like Career Counselling, Stress Management, Negotiation Skills, Time Management, Presentation Skills, Retailing etc. He has conducted training programmes for employees of well-known PSUs/ Private Companies and has international exposure of visiting countries like USA, Germany, France, The Netherlands, Malaysia and Singapore. He has organized and moderated Academic & Industry sessions at Round Table Conferences/ Seminars, as well as conducted Webinars. It’s his love for story-telling and writing which has tempted him to write several articles, co-author a book and present one of his papers at IIT, Delhi. He is also a script-writer, poet, lyricist and composer. He believes in living as many lives as one can in a single life, by wearing different hats.

Preeti Sahay is a Spanish and English teacher. She is a keen reader who loves knowing about the lives of ordinary people. Different cultures of the world and the way the life unfolds itself at various moments intrigues her. She finds stories-new and old, equally enthralling and the best moments are those, with a book in her hand, lost in the wondrous world created by the writer. She equally enjoys watching movies and travelling and her dream is to be able to travel throughout the world, not as a tourist, but as a local, immersing herself in the culture, food and rituals of the original residents of the place.

They are happily married since the last 27 years and stay at Delhi with their two grown up kids. Both of them are movie buffs and chess enthusiasts. Their writings and works may be seen at http://shankarsahay.wordpress.com/,  https://www.youtube.com/channel/UCm4tQfyM3CUVYuulo7yN2vA?view_as=subscriber