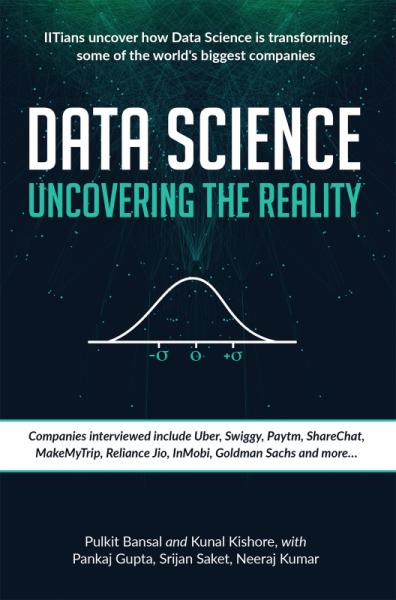 Data Science has become a popular field of work today. However a good resource to understand applied Data Science is still missing. In Data Science Uncovering the Reality, a group of IITians unravel how Data Science is done in the industry. They have interviewed Data Science and technology leaders at top companies in India and presented their learnings here.

This book will give you honest answers to questions such as:

How to build a career in Data Science?

How A.I. is used in the world’s most successful companies.

How Data Science leaders actually work and the challenges they face.

Pulkit currently works as a Lead Data Scientist at MakeMyTrip in Bangalore. Previously he has worked at Adobe, and before that he worked in Quant roles at WorldQuant and Goldman Sachs. He is a graduate from IIT Kanpur with dual degree in Mathematics and Scientific Computing. Outside work, he enjoys reading about history and likes to engage in physical activities such as Trekking, workout.

Kunal currently works as Research Scientist at InMobi Bangalore. He has worked on large scale Recommendation Systems and transaction prediction for ad bidders. He graduated from IIT Kharagpur with a B.Tech. degree in Electronics and Electrical Communcation Engg. He loves to read about and watch movies across languages and is ready to go out for good food any day any time. :)

Pankaj is currently working as a Senior Data Scientist at ShareChat, and is a graduate from IIT Kanpur with dual degree in Mathematics and Scientific Computing. He is machine learning enthusiast with particular interests in deep learning. His favorite pastimes involve running, trekking and travelling. He loves to read and learn about new technologies.

Srijan currently works as a Senior Data Scientist at ShareChat. He has worked on recommendation problems and has been involved in developing the content processing pipeline which is the backbone of ShareChat. Before joining ShareChat, he was working as a Data Scientist at Fidelity Investments, Bangalore. He worked there on NLP problems and used it to develop recommendation systems & build predictive models.

Neeraj currently works as an Analyst at Goldman Sachs. He has done summer internship with Worldquant and also has worked as part time research consultant with them for about a year.