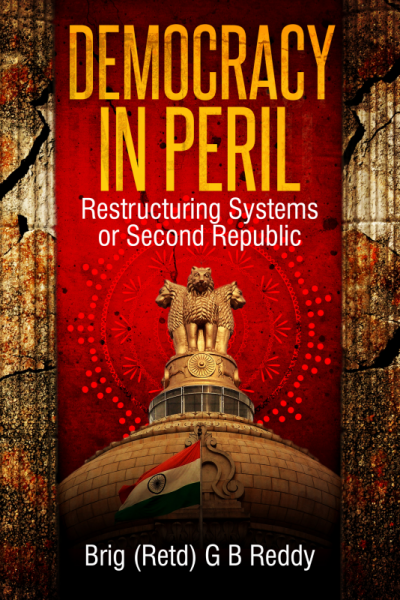 This book is unique. It raises the issue “What ails India and Indian democracy” and attempts to provide a perspective – its riddles and paradoxes in India’s context and content. If the reader believes that Indian democracy is vibrant and resilient despite numerous threats enveloping the nation, the author has made prescriptions to bail it out.

With the theme as “Democracy in Peril”, this book is thought provoking for all alike. Through an incisive analyses of evolution and growth of democracy as a political order, the author provides an intriguing insight into today’s political developments – power politics and turf wars - and adversarial postures both intra and inter political party’s and leaders conflicts and crises.

Call them challenges or threats, democratic institutions are at war with each other, leadership vacuum is real and there is widening trust deficit between the leaders and the people.

The author has provided enough evidence through mapping the ‘ills’ tormenting Indian democracy and prescribing changes necessary to its structures, actors and processes, as reforms or refinements, lest the nation gets swept by violent revolution. His review of leadership crisis contributing to policy paralysis and virtual breakdown of functioning of Parliament and Legislatures due to adversarial and acrimonious confrontations both inside and outside are quite exhaustive.

The author blames the murky electoral processes and how they have adversely influenced and governed the behavior of elected representatives in smooth and effective functioning of the Parliament and Legislatures in the conduct of business. He suggests that the struggle to tackle numerous challenges and threats emerging ever more appears to be a mirage and beyond the competence of present day self-centric leadership within the framework of the First Republic.

Few of the key issues addressed in Part 3 are comprehensive emphasizing the need for action.

By synthesizing his thoughts and reflections extending over six decades – from undergrad student of political science and history to national security strategy research scholar – the author has produced a book of “par excellence” quality from both theoretical and practical perspectives. Its end purpose is simple – to impress the reader to understand the present political travails tormenting the nation and find appropriate solutions.

A must read book for all alike.

Served as Consultant/Senior Visiting Fellow at the National Institute of Rural Development, Hyderabad, and established the Rural Technology Park in partnership with reputed NGOs to accelerate transfer of appropriate technologies to rural areas. He had served at senior level with Corporates: Kitply Industries Ltd and Hilton Tobacco Ltd, Consultant.

Having graduated in “Political Science and European History”, Reddy possesses not only comprehensive theoretical knowledge of history and politics, but also has extensive exposures to realities in rural and urban environments. His exposure to counter insurgency since 1962 has also given him the ‘first hand’ exposure to all that is murky at various levels.

Reddy is a prolific writer on social, political, economic and military affairs. He has authored five books: In Search of National Values – Withering Secularism, Democracy and Socialism; Nation in Crises – Dimensions of National Security and Terrorism; Blending the Traditonal with the Modern – Cost Effective Rural housing Technologies; India’s Nuclear Technology Dilemma – Projection and Realities; and Fight against Corruption and Leadership Decay.

He is a graduate of the National Defense College, New Delhi, LDMC & SDMC at CDM  and Command and Staff College, Kingston, CANADA.  He is a guest speaker and faculty member in premier institutions of the armed forces. He has also  participated and presented papers in various seminars organized at national and international levels.

Recipient of Ati Vishist Seva Medal for distinguished service of exceptional order in Nagaland, Mentioned-in-Despatches for gallantry in 1971 War and COAS Medal in recognition of academic excellence at the College of Combat.