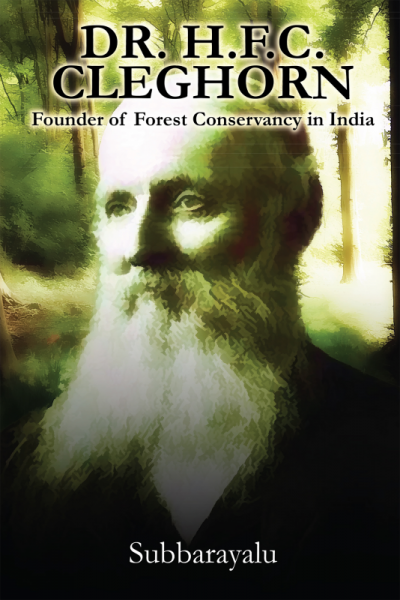 On the advent of British rule, there was unprecedented pressure on the forests for commercial exploitation. This led to their denudation, which in turn caused the silting of rivers, resulting in poor flow of water, leading to famine. Among the East India Company Surgeons there were some who were ardent nature lovers and who showed keen interest in the preservation of natural wealth.

This book is a tribute to one of those veteran Surgeons, Dr. H. F. C. Cleghorn, who was instrumental in introducing Forest Conservation not only in South India, but also in the Punjab, and all over the Indian Empire. Dr. Cleghorn was under the East India Company serving as military Surgeon in the Madras Presidency.

For his pioneering works, Dr. Cleghorn was conferred the title ‘The Founder of Forest Conservancy in India’. He retired in 1869 and returned to Scotland. There again, he ensured that an exclusive course in Forestry was included in the Syllabi of the University of Edinburgh, and he also got involved in the selection of personnel for Indian Forest Service. His collection of plant drawings and books finds a place in Royal Botanical Garden Edinburgh.

This book is a deep narrative on how Dr. Cleghorn organized Forest Conservancy on an all India basis and how he got people like R. H. Beddome, the Naturalist, to work with him. His association with the formation of botanical gardens at Lal Bagh, Bangalore, and Udhagamandalam, are interestingly captured.

S. Subbarayalu did his Forestry from the University of Edinburg served in the Indian Forest Service and retired as Principal Chief Conservator of Forests. He was the Chief Wildlife Warden in Tamilnadu, and the founder Director of Aringar Anna Zoological Park Chennai. His passion for Botany got him to write and publish his book ‘Endangered plant species of Tamilnadu’ in 1999, that is today a source of reference for the ardent botanist.

Subbarayalu is a managing committee member of the 108-year-old Santana Dharma Vidyasala, Alappuzha, which owns and manages several educational institutions co-founded by his grandfather and father. The pioneering work of these two eminent personalities was earlier captured by Subbarayalu in a book titled ‘Doyens of Education’.