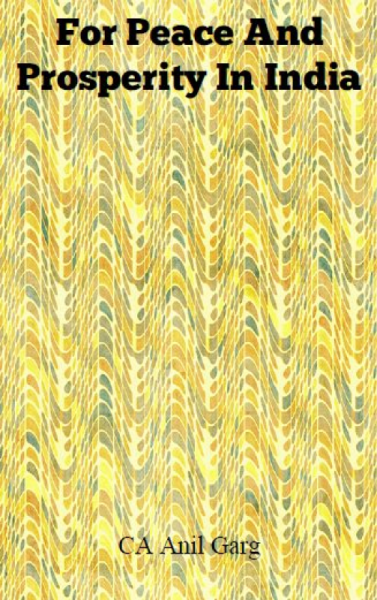 For Peace And Prosperity In India

Author is a Chartered Accountant with 32 yrs experience incl. half as entrepreneur. Aggrieved with India’s status as a bottom performer, he has analyzed most issues concerning legal, economic and administrative environments in India preventing it from reaching its potentials. India ranks close to bottom in almost any international surveys when it is one of the handfuls in space launch or super computer technology, resplendent with vast natural resources and a huge domestic market blessed with young population. English speaking population and deep routed legal and corporate systems should have been a bane of envy for most of the emerging economies and yet, we are a laughing stock of the work, devoid of any true friend, not even in our close neighbours.

Unwillingness to solve Kashmir problem has brought terrorism through our front door. People are content to accept any problem and adjust with it, incl terrorism. Govt is no longer custodian of public interest. Corruption rankings sound unrealistic when conducting exams for admission to medical colleges is also soaked in mutli-crore corruption scandal questioning credibility of the most noble profession, doctors! Basics are neglected but $40 billion are spent in subsidies! Common Wealth Games cost more in Delhi than in London. Corruption and insatiable thirst for revenue has made government behave like a foreign occupier. Vested interests are in firm control. Courts take decades to decide cases and there is no finality, each case goes to appeal. Public prosecutor is caught taking bribe from rape-accused. Business is treated as a necessary evil. Things are in dire shape indeed.

Author analyzes most of these issues and makes concrete recommendations for Administrative, Legal and Economic reforms, and goes on to suggest his model New Economic Policy as well. A truly thought provoking work!!!

Anil Garg, 55 yrs, is a Chartered Accountant, and with 32 yrs experience of trade and industry, including last 16 years as entrepreneur.

His business was successful. His company, Radix Impex P Ltd., soon became the second largest PET container manufacturer for agro chemicals, and was highly reputed on all India basis for containers for edible oils, pharmaceuticals, agro chemicals and liquor applications. His business grew manifold and was profitable, but he grew disenchanted with tremendous policy uncertainties and general government hostility in dealing with business. In 2011, he pulled out of manufacturing and decided to become an investor.

As entrepreneur, he got exposed to most facets of the country’s governance and was able to compare the same with rest of the world. He realized that while Indians are next to none in caliber individually, they don’t perform that well collectively as a nation. India ranks close to bottom in almost all international surveys, and is among the most unsafe countries in the world. And, this is despite the fact that most Indians are God fearing, non-expansionists and content. It is lack of leadership and misplaced faith in socialism, except for brief spells under Rajiv Gandhi and Narasimha Rao when India was able to unleash some of its potentials, that has delivered India of today.

Aggrieved with general failure in almost everything, he decided to write his perception of the things in “For Peace And Prosperity In India” meant to agitate thought process, challenging the status quo, and daring bold ideology with problem solving approach, for achieving Peace and Prosperity in India.

He has been writing articles on these subjects and sharing them with professionals like CAs, MBAs and Lawyers on their websites. These have been appreciated.