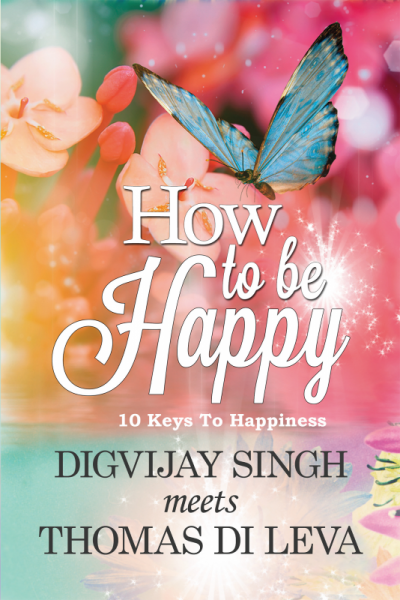 How To Be Happy 10 Keys To Happiness

We all want to be happy. There are different ways to get to this beautiful place called Happiness. All you have to do is to decide that no matter what, you will lead a happy life. And when we say a happy life, we mean a place that is refreshing, rejuvenating and filled with peace and love. This book shows you that Happiness need not be an elusive place and with the help of 10 keys presented in this book, you can easily get there. So let's move to happy times...

Thomas Di Leva is a personal development coach and meditation expert with more than 25 years of experience in the field of personal development and spirituality. He has been coaching thousands of people in his home country Sweden both in live events as well as on tv and radio for over two decades. His trademark "Personal development to unleash your highest power", highlights the global importance of building bridges and reaching oneness within and between all the spiritual and personal development communities and organizations that exist in the world and on the internet, as well as integrating your inner self with your worldly character. The self- help topics Thomas writes about and shares his knowledge in includes: meditation, goal setting, law of attraction, mindfulness, life coaching, affirmations, healing, tantra, mantra, chakra, motivational speaking, personal growth, awareness and so much more... Thomas Di Leva is also a highly acclaimed Swedish singer/songwriter for almost three decades now. He has had numerous hit-songs on Swedish radio since the 1980’s and up until now. He has also made a large number of TV-shows, concert tours and theatre plays including Hamlet.

Digvijay Singh was born in a Kshatriya (warrior caste) family in central India. He belongs to the Raghuvanshi clan (Raghu is derived from King Raghu - the great grandfather of Lord Rama and vansh means clan). His father followed the Kshatriya tradition and became a general in the Indian army. Digvijay was more fascinated by Shakespeare and chose literature instead of the world of guns and tanks. He took a Master's degree in English literature from Punjab University in India. Later, serendipity placed him in Sweden and he took a Master's degree in Information Science in Sweden. From childhood, he was nurtured on the Vedas, the Upanishads, the Gita, the Ramayana and the Mahabharata. The Hindu scriptures left an indelible impact on his mind and so did the words of Jesus, Buddha, Ramakrishna Paramahansa and Swami Vivekananda. He has devoted more than three decades to fathom the world of Sanskrit literature.