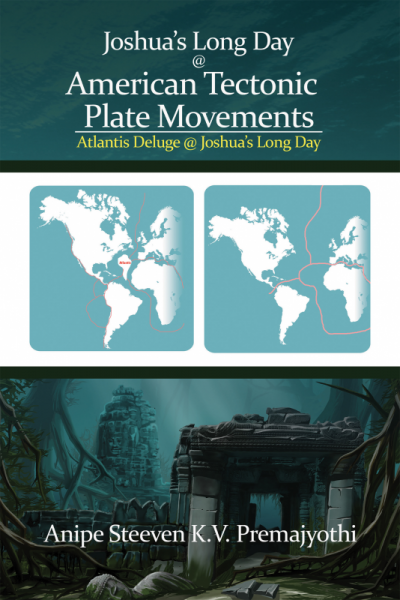 A prominent third century (BC) philosopher narrated the story of Atlantis using a phrase “it was destroyed in single day and night.” Upon the author’s search for physical evidence for Joshua’s Long Day, this phrase became a base for historical speculations about this issue:

Before 1405 BC, Central American region was at a navigable distance to Atlantis

African and Arabian plates stood for about a day, that is, Joshua’s Long Day

Countless books, faith in God’s miraculous acts, research and conversations with noble persons helped the author arrive at a conclusion.

Anipe Steeven Premajyothi BSc, BEd, MDiv, has been serving unto the Lord for two decades meditating the Word of God and searching for secrets in His word. He authored End-Times @ Dead Sea (2009) in his native language and during its English translation, a Biblical word “carcass” led him to conclude the Garden of Eden’s location in Israel before global flood and he has also authored another book in English, Paradise Found (2012). Now Steeven with the help of God’s spirit wrote about Joshua’s Long Day @ American Tectonic Plate Movements – a book of intrigue.

He partners with local pastors in rural villages to spread God’s word. In full support of him are his wife Vijaya Kumari, his daughter Jyothi Theressa, and his son Jessi Hemanth. His younger son, Samuel Sumanth, went home to be with the Lord in 2008.