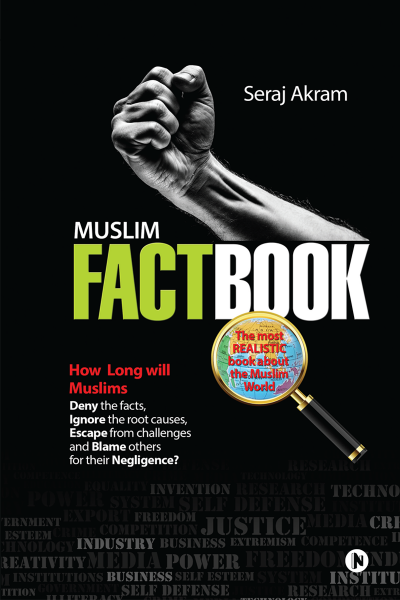 Muslim FactBook The most realistic book about the Muslim World

Have you ever thought why the problems of the majority of Muslims countries increase day by day instead of decreasing?

Do you think its reasons are the same you get from media, scholars and other people or the root causes are something else which is not being discussed by anyone in any media?

Muslim FACTBOOK gives you clarity about challenges, problems, root causes and the solutions that can bring significant changes in the Muslim community from the base.

This book is most realistic on the situation of the Muslim world with data about different fields, from education to industry, economy, creativity, IQ, the gaps, and the attitude of common Muslims, the root causes and possible solution. With alarming facts, the book touches on topics which are rarely discussed in the media. Deep and bold analysis to find the gaps and its impact has been written in this book which is crystal clear that where are the exact problems and what this community should do.

A realistic approach to see the issues of Muslims around the world. The facts, gaps, root causes, analysis based on data will help you to see the issues clearly. The facts are very clear to evaluate the output of what this community putting as input.

An eye-opener that everyone should read patiently to know the real power game, gaps between poor and rich countries, and the outcome of these huge gaps.

Seraj Akram graduated from LNMU, Darbhanga (India), is a designer by profession, a writer by the situation and a social thinker. He is a social worker and is always concerned about the sufferings of people. This is his first book, written to make people aware of facts, causes of pain, and their solutions. When the author realized so many gaps between the rich and the developing countries, he started to analyze the reasons behind them. This book is a result of eight years of the author’s hard work.

He has been writing articles on different social issues. This book was incubated while preparing one of his presentations about countries that ranked the highest in various categories. It was surprising that none of the Muslim nations was in the top twenty in almost every field, and most of the 49 Muslim dominated countries of the world were noticeably present only in the negative areas.

This is an effort to mirror the developing nations, especially to the Muslims who are nowhere in the top ranks so that Muslim youth focus on what matters the most. Being a social worker, he has tried to show the truth through the facts. We, as Muslims, can criticize and comment on others, but changes will come only when we introspect and strive hard according to the severity of problems.

The facts are hard but awakening for all.