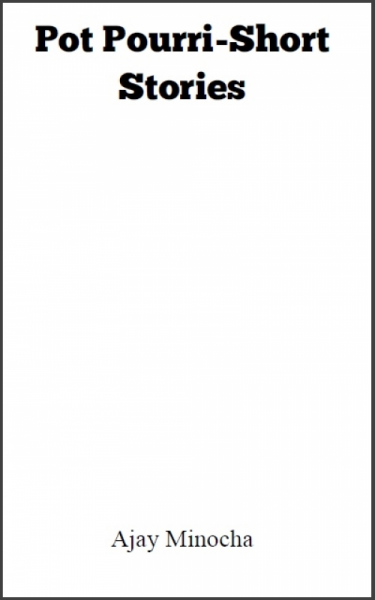 It started off with a short story contest hosted by my publishers Notion Press. I went and wrote one on my childhood days and promptly sent my entry across. Using the medium of a social network, I let more than a hundred odd friends know about my story. Most of them knew that I have a passion for writing as this was not the first time I’d written anyway, but their reactions were hilarious. Many of them congratulated me for my second book and some of them even asked me in person, ‘what’s your latest book about?’ For God’s sake, it had only taken me a few hours of writing and it was just a short story. That’s all! On the flip side, those that did spare time liked what they read. Inspired by the fact that my story was liked, I went ahead and wrote another seventeen chapters and completed this book but as far as many of my friends were and are still concerned, I am supposed to have already written it.

‘Pot Pourri’ is a narration of real life incidents that I recall from as early as my childhood days up to as recently as the last decade. Albeit in installments, this book is based on true facts. That it is stewed a bit is only to make it that much spicier. Must admit that life is essentially the way we make it out to be and when we see the funny and lighter side of it, it's easier to enjoy ourselves. Keep smiling and enjoy the read...

Born in Chennai in the year 1961, I was the first son and the second child of the house. I grew up to be a Mechanical Engineer, passing out from the Regional Engineering College today known as the National Institute of Technology Warangal, India in the year 1983.

Joining my father in business immediately thereafter, the spirit of entrepreneurship drove me all across the country. Learning languages and meeting people became a sub-conscious passion inside of me and so I travelled extensively not only within but also outside the country becoming a small time multi-linguist in my own right. I was in the trade of drilling for water and as if I hadn’t had enough within the country, I ventured out to Ethiopia late 2003.

I had then been married 16 years, a happy and proud father of two. A moment of ill-fate toppled the world around me when we lost our fifteen year old son Rishabh in July 2004. I followed my wife’s footsteps and took up the practice of Nichiren Daishonin’s Buddhism in the year 2007 after I returned from Ethiopia.

Given the gift of writing by the faith I practice, I have but a simple message to convey…. ‘There is nothing called darkness, either within or outside of us. Every individual has the infinite power to invoke his infinite wisdom by prayer, perseverance and a faith to change the life state within and outside. Therefore please start believing that you can and you will win.’