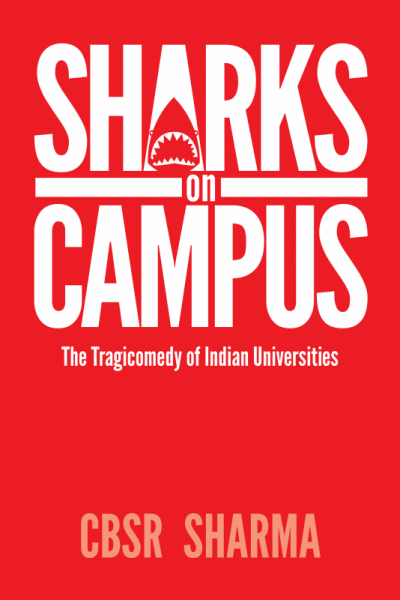 Sharks on Campus The Tragicomedy of Indian Universities

Brain drain 2: Illiterate rural poor due to lack of schools or their accessibility.

“Only 30% of students are employable, none is worthy.”

Such comments are due to fraudulent educators of youth – the fourth brain drain, which is the subject of this book. Can the galloping placebo culture be expelled from universities? The youth is corrupted for life by academicians, who have no values. Bitter truths, stranger than fiction, are found in the forty-one articles of this book, which cover some aspects of education in our universities and it also suggests some reforms.

The author represents the fifth brain drain: Obstruction of useful talents by evil forces and their stolen futures.

Prof. Sharma was born in the last village on the banks of Godavari on 2-11-1942. He lived and studied on islands between Godavari and Bay of Bengal until 1961, traveling 6–15 miles daily, either by foot or bicycle.

He was the first Ph.D of Birla Institute of Technology and Science, Pilani [1968–9] and was under the influence of good people such as Professors B N Muley, B D Deshpande, S K Pillai, Ambuja Pillai, Gundu Rao and Mummyji [Mrs.Indumati Muley]. His friends, Surendra, Rama Rao, Subba Rao, Jayant Gupta and Pranab Ray helped him develop wider reading, public speaking and writing habits.

After a post-Doc stint for 32 months at Indian Institute of Science, Bangalore, he joined as Lecturer in Berhampur University [1973], a Reader in Madurai University [1980] and a Professor in Bharathiar University [1985]. Fate drove him to Pondicherry Central University in 1987.

He taught Natural Resources, Environmental Politics and Genetic Toxicology and lectured in 35 Universities. His research activity sums up to 6 projects, 8 Doctorates, 30 technical papers in the developed countries and 50 in India. Visiting USA, UK, Italy, Hungary, Thailand and Malaysia were great experiences and he missed the Oxford University in 2009. He tried to pass everything good to students.

He is a lower-middle class agnostic believing in Darwin, Marx and Freud. His wife is his best friend and admirer.

Other Works by the Author