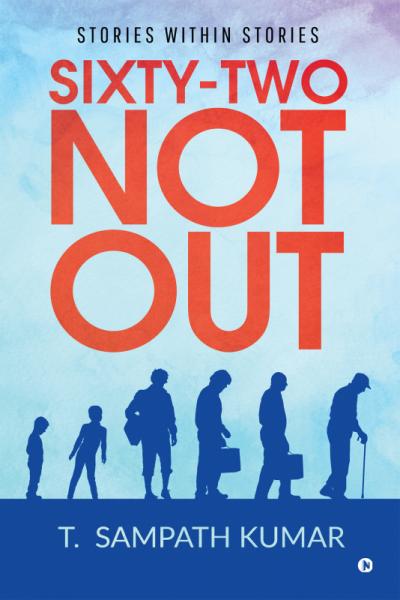 Sixty-Two Not Out Stories Within Stories

This book is a collection of 62 real-life stories from the author’s experiences that occurred over 15 years. Thirty-four of these were published in a daily. Twenty-eight are being published for the first time here. These include a diversity of characters, incidents, conversations filled with unsuspecting twists, suspense and thrilling, joyful and happy endings. These are stories embedded with emotions, relationships, mysteries and learning.

-How does a grandmother serve a royal meal of one full egg to her grandchild? What message is she trying to convey to the rest of the family through this?

How did a group of friends save their friend’s life?

How did an aboriginal person stir sugar in hot tea?

Why and how did a white Canadian argue to travel together in the same coach with an Indian in a train?

How did an uncle save his nephew from mosquito bites?

A concoction of non-fiction and a cocktail of emotions, mysteries and relationships, the author has transformed 62 real-life stories in a literary diamond with 62 cuts.

Over his thirty-eight-year career, Sampath Kumar travelled widely across India in connection with human developmental projects. This included working in areas devastated by natural disasters like earthquakes and tsunamis. These challenging and enriching professional engagements helped him write stories, poetry, articles, essays, photo-features, middles, research papers and novels. Some of his literary works have been translated into Hindi, English and Punjabi. He has also published two anthologies of stories in Telugu.

In 2017, he published his first novel in Telugu, Kadalikalu, with the backdrop of the devastating earthquake that shook the tiny country of Nepal in 2015. His book of Telugu poetry (100 epigrams) has been translated into English with the title Terse Verse on the Tsunami. He donated the proceeds from the sale of these two books to Indian NGOs.

Since his retirement in 2015, Sampath has been engaged with multiple developmental activities as an NGI (Non-Government Individual). He designs and conducts participatory workshops and trains students, focused groups and couples on improving their quality of life.

Sampath shuttles between New Delhi and his hometown, Nirmal. Currently, he is researching and interacting with people and communities in preparation for a novel in English, slated to be released in 2023.