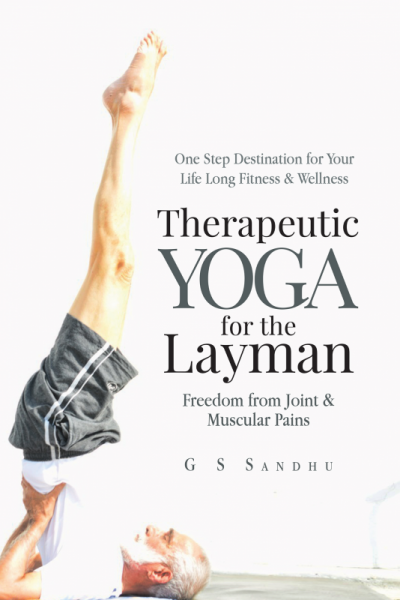 Therapeutic Yoga for the Layman Freedom from Joint & Muscular Pains

This book is dedicated to those who have suffered from severe pain, lower back or otherwise and have experienced its devastating impact. As we all know, birds and animals have neither doctors nor medicines; they cure themselves with their natural instinct, whereas our diseased body organs are restored to normal by administering medicine internally or externally. Why can’t our bodies also be healed with the help of Yoga Postures, Aqua-Pressure and Dietary Controls?

The aim of this book, therefore, is to make the general public aware of the yogic methods of treating various diseases and ailments. The emphasis on topics, choice of asanas and other exercises given have been deliberate only to highlight therapeutic yoga as a practical guide for stress-proofing of the body as well as the mind.

May yoga prosper in leaps and bounds and bring peace to the world!

The author of this book Mr G S Sandhu is an engineer, by profession, with a post graduate degree from National College London; by passion, he is a qualified Therapeutic Yoga/Structural Health Practitioner from the world famous “Bihar School of Yoga”, Munger, Bihar. Yoga has been his interest right from childhood. Apart from attending several Yoga Camps, he has also attended two International Yoga Conferences held in 1992 and 2013. For more than thirty years he himself had suffered from backache, sciatica, lumbago, cervical spondylosis and other pains of the spine and joints. He has studied, in-depth, about the effect of yogic exercises in the treatment of various ailments especially in joint and muscular pain, which makes his book unique. He has also contributed several articles to the monthly journals of various organizations.

b.Health & Nutrition monthly magazine published his success story under the heading “Escape from Sciatica” in its February 2003 issue.

c.An article on “What you ought to know about structural health” appeared in the Golden Years Souvenir of Chandigarh Senior Citizen’s Association in September 2006.

d.“Yoga for Senior Citizens” appeared in the 13th volume of War Decorated News in July 2008—the official mouthpiece of the War Decorated India.