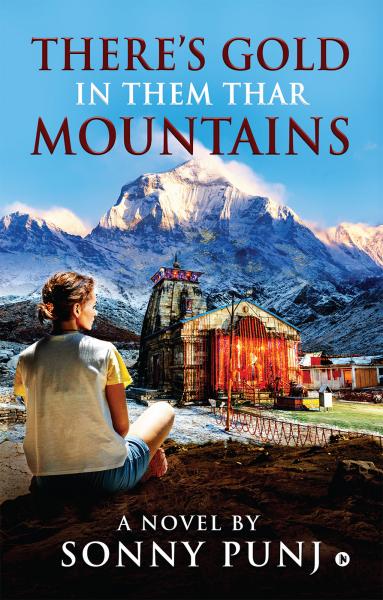 There's Gold in Them Thar Mountains A Novel

Tricia and her brother, Shaun Morrissey, recovering from the tragic loss of their parents in an auto accident a couple of years earlier, undergo a period of turmoil in their previously placid lives in London. The turmoil is initiated by Tricia’s trip to the Himalayan mountain region in India, specifically to the mountain top temple of Kedarnath, at an elevation of 12,000 feet, where she suffered an event of memory lapse, possibly caused by inhalation of cannabis.

Having returned to London and submitted herself to counseling by her psychotherapist, she is contacted by the newlyweds, Kris and Susan Hamsun, from Washington DC, claiming to know both—what caused the event and the way to emerge from it.

Having convinced both Tricia and her skeptical brother, Shaun, as to the veracity of his claim, Kris, assisted by his Norwegian buddy, Jurgen, and other associates from his own treasure-hunting adventure, train and assist the duo in the successful recovery of the treasure.

Post the successful task completion, Tricia is then advised to seek out the remaining 6 companions and similarly assist them in executing their treasure recovery task.

While undertaking this transformation, Tricia makes her first contact with one companion, based on guidance received from the Dalai Lama and a Buddhist sage.

Having spent his early years in a boarding school located in the Himalayan region, in the lake resort of Nanital, at an elevation of 7000 feet, Sonny Punj is familiar with the mountain life of the common people in the Himalayan region, comprising both the pleasure one derives from such ideal living, the difficulties and challenges associated with such mountain habitation.

In his early years, while his paternal side of the family was purely a business-oriented one, his maternal grandfather and brother were practicing yogis, despite having led professional lives as administrators in senior government circles.

Sonny observed both these brothers, at that time in their seventies, writing in their free time, with the intent to publish when completed. Unfortunately, for both, despite having lived extended lives, the publication of their writings just never happened.

Possibly driven by these memories, the author is determined to pen his thoughts and publish the same as fiction, Time Travel through Reincarnation, addressing especially subjects such as Tantric yoga, scientific acceptance of reincarnation, technological innovations and their application to emerging economies such as India and other related topics.