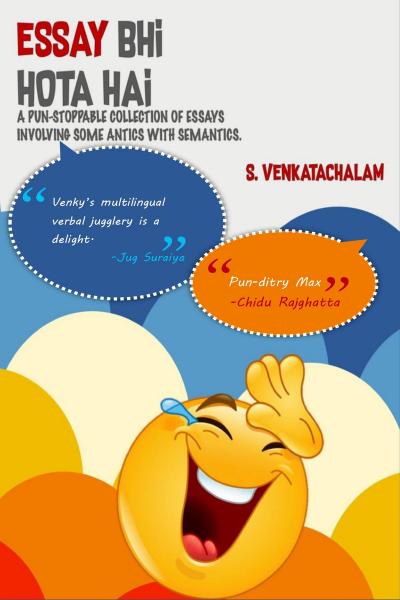 Word Play at its very best from a die-hard ‘Pun’dit! This book is indeed a collection of absolutely hilarious ‘Pun’stoppable essays involving (more than) “some Antics” with ‘Semantics’. The author has written over 200 absolutely original and creative ‘Pun’eer Mutterings, on a wide range of subjects that have hit the headlines over the past few years. He effortlessly toggles between numerous languages and his off-beat articles make readers take note and say “Essay Bhi Hota Hai”.

Venky, as he is known, is not one to resist any opportunity for wordplay. His amazing ability to do “some antics” with ‘semantics’ is the reason why he is referred to as a die-hard “Pun-dit” among his friends’ circles. He has been regularly posting articles in Facebook, Whatsapp, The Times of India Reader's Blogs, and many of his pieces have gone viral.

He draws inspiration from his father, V. Sesha Ayyar, and it is clear that he has inherited the humour tumour from him. Having lived in numerous places, he can claim to have led a pretty nomadic existence. And, this has definitely helped him toggle his word-play effortlessly between numerous languages.

In his typical style he says “When in a vacant and in ‘pun’sive mood, I try to extract every “Word’s-worth”! His off-beat articles make his readers take note and say “Essay भी होता है”.