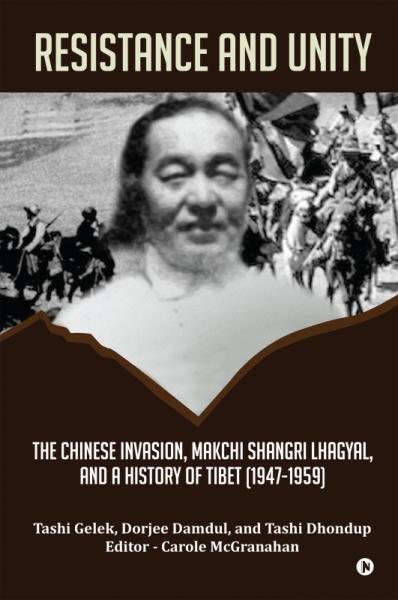 Resistance and Unity The Chinese Invasion, Makchi Shangri Lhagyal, and A History of Tibet [1947-1959]

This book is an important addition to the history of Tibetan opposition to the Chinese takeover of their country. Shangri Lhagyal was one of many Tibetans who refused to cooperate with the Chinese as they tried to substantiate and legitimate their claim to sovereignty over Tibet. He, like many others, was forced into open opposition as the only honorable option. Although he modestly resisted a leadership role in the Resistance, his competence and reputation for integrity led others to choose him as one of the most important Resistance leaders. Although he did not leave an extensive written record, several members of his family have admirably filled in the historical record of the events in which he played such an important role. As the editors of this account have emphasized, it is important for Tibetans as well as the outside world to know the true history of the Tibetan resistance to China’s forcible imposition of its rule over the formerly independent country.

This book is inspired by H.H. the Dalai Lama’s idea that each Tibetan refugee, especially the freedom fighters, should document their personal experiences to inspire and to keep coming generations of Tibetan well informed about the true history of Tibet. The book deals brilliantly with many minute and significant details of modern Tibetan history, lived by ordinary citizens, which would have otherwise gone unrecorded and unsung. It is, by all means, a must-read for the new generation of Tibetans as well as their non-Tibetan supporters.

—Vijay Kranti, author of Dalai Lama: The Soldier of Peace

Resistance and Unity is more than Makchi Shangri Lhagyal’s personal story. It is a condensed modern history of Tibet from a Tibetan perspective. Following Shangri Lhagyal’s life, readers go back to the crucial years of the 1950s-60s when Tibet—a country that was never before ruled by any foreign power—was made part of the People’s Republic of China. Tibetan freedom fighters fought heroically against social transformation programs forcefully imposed by the Chinese Communist Party. Many fought to the last drop of blood. For Chinese readers, this is a must-read book.