Gautam Das graduated from Medical College, Calcutta in 1975. He completed Master of Surgery in 1979, and moved to England the same year. He was admitted to the Fellowship of the Royal College of Surgeons of Edinburgh in 1981. Gautam was awarded the Surgeon-in-Training Medal of the College in 1988, before going on to obtain the Specialist FRCS (Fellowship of the Royal Colleges of Surgeons) in Urology.

In 1990, he was appointed Consultant Urological Surgeon at Croydon, where he worked until his retirement in June 2016. Between the years 2005 and 2010, Gautam also operated at St George’s Hospital, London as a Pelvic Cancer Surgeon. He is a Patron of the South-East England Cancer Help Centre. 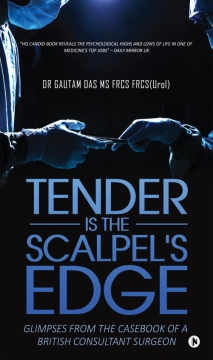 Tender Is the Scalpel's Edge

What is it like to be the senior surgeon when a young woman is brought to casualty with a life-threatening bleed?

What does the fear of cancer do to a person?

Is it ever best not to tell the patient everything?

What is it like to be the senior surgeon when a young woman is brought to casualty with a life-threatening bleed?

What does the fear of cancer do to a person?

Is it ever best not to tell the patient everything?

Tender is the Scalpel’s Edge draws on Gautam Das’s real-life experiences working in Britain’s busy NHS hospitals – from the plunging depths of a patient dying on the operating table to the euphoria of a life saved by teamwork and skill. Gautam shares his journey from being a medical student fighting his own inner demons to becoming a senior consultant surgeon. Shards of his earlier life in India add to the richness of the narrative. Tales such as the one of the little village boy suffering from bone cancer, observe life with all its contradictions.

Tender is the Scalpel’s Edge is written to inform and engross the general reader, as well as those who are curious about life behind the surgeon’s mask. It is a moving collection of true stories from a professional at the frontline of medical care.