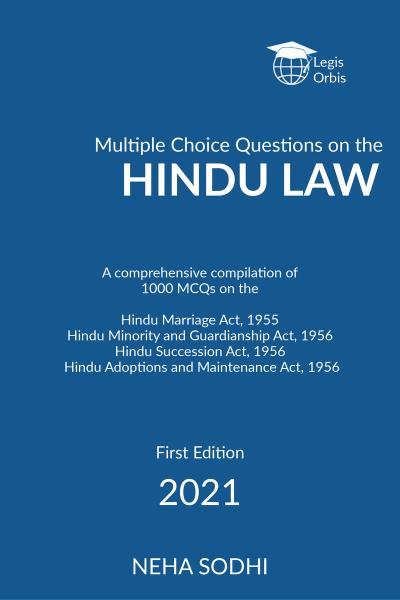 Legis Orbis's Multiple Choice Questions on the Hindu Law  is a comprehesive compilation of 1000 MCQs on the Hindu Marriage Act, 1955, the Hindu Minority and Guardianship Act, 1956, the Hindu Succession Act,1956 and the Hindu Adoptions and Maintenance Act,1956, that aims to become first choice of students who are preparing for various competitive examinations, including, inter alia, Judicial Service Examination (Pre), Civil Services, State Services, Law Entrances etc., Besides, this book is dedicated to each and everyone who really want to have a good command on this subject.

Legis Orbis is a pro bono initiative, conceived with the idea to help the law students in India and abroad, in having a better understanding of the Indian Laws. It is an online platform which caters to holistic growth of legal education. The founding team consists of Mr. Abhishek Choudhary, Advocate, Supreme Court of India, B.Sc. L.L.B. (Gold Medalist), who is also the Editor of the series of these books , Ms. Ritika Ritu, Advocate, UGC-NET, L.L.M, B.Sc. L.L.B. (Gold Medalist) and Ms. Rajashree Kanungo, L.L.M.(Gold Medalist), L.L.B.(Gold Medalist). The team of Legis Orbis envisions creating a better tomorrow for all, including the students who are the backbone of our nation, and have also introduced the idea of #LearnFromHome, which also aids in stopping the spread of infection, without suffering any academic los during this crucial time of pandemic.

Neha Sodhi is an advocate who practises law before the Hon'ble Punjab and Haryana High Court. She has completed her BCA L.L.B, L.L.M and PGDCJ.