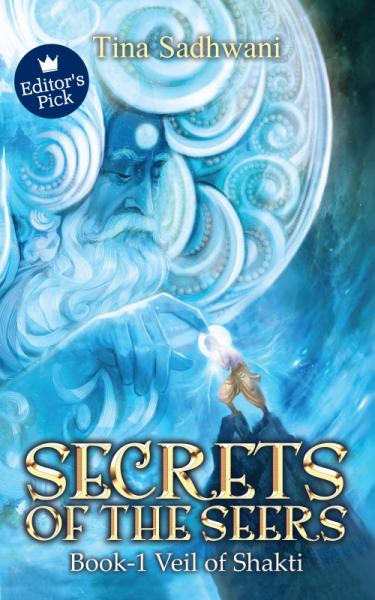 Secrets of the Seers Book - 1 Veil of Shakti

An ordinary monk discovers that he has mysteriously become the Chosen Initiate, one who is bestowed with superhuman powers. He is enrolled in the Aryavarts School of Yog – the Magical School – where he must now learn how to harness that divine force, which alone can render him a keeper and master of those ancient-powers.

But those ancient powers are now hidden behind a mysterious Veil that runs across the Seven Worlds, separating all of humanity from a hidden kingdom that lies beyond.

It now falls on the monk to go beyond the Veil, to secure the secret knowledge of the Seers, which alone can dispel the darkness of the coming Age of Chaos.

Two other prentice monks join him in this supernatural adventure, which unfolds in incredible encounters with kings, sages, demons, giants, warriors and gods.

Will the Chosen Initiate fulfill that great destiny, which will lift the Veil of Shakti, to reveal to him what lies beyond?

Tina Sadhwani is a writer on Sanatan Dharm, Hinduism, Indian Philosophy and Vedic Culture. She is a passionate researcher of Eastern Dharma-Schools, Yogic Mysticism, Ancient Indian Mythology and Puranic Fantasy.

She has a Masters degree in Psychology, and has taught Indian and Transpersonal Psychology at Montfort College, Bangalore.