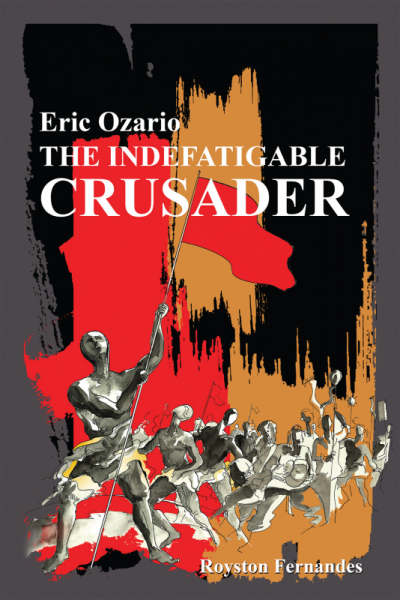 The Indefatigable Crusader takes you through an inspiring journey of struggles and battles that Eric Ozario fought, for the lesser privileged and the downtrodden. It begins with the arrival of European Missionaries in Mangalore, and the socio-cultural and economic impact of their religious conversion of the locals. Eric’s life is an interesting mix of the appalling poverty and social isolation that he had to endure in his childhood, and the colourful larger than life persona that he displayed as he grew. His bitter experiences helped him analyse the true colours of this society and its unjust model, which he chose to oppose all his life.

Eric’s crusades as a young man campaigning for the people of his ghetto, is electrifying, hair-raising, stimulating and motivating. His fight, leading the Christian workers against their employer – the church, is definitely emotive to many and may even be scandalous to a few. All his struggles particularly in Christian establishments blatantly expose the duplicity of organised religion.

But what may surprise many readers is the fact that Eric, despite leading the agitations, is also, a celebrated composer and singer par excellence. He is not only a distinguished artiste, but also is a creative innovator, an excellent organiser, an eminent educator, an admired leader and an illustrious, untiring Konkani activist who through his organisation Mandd Sobhann, has rejuvenated Konkani language and culture.

Eric’s life is a perfect blend of the brave tiger that fought for the people and the flamboyant peacock that performed before the world – a rare combination that only a few celebrated and accomplished personalities in the history of this world possess. His stimulating and saluted life will, without doubt, inspire and awaken the revolutionary in you.

Royston Fernandes, the young author, has authored 2 books previously, both on ecology. The first one, ‘Shall we save the Earth?’ he wrote when just 17. ‘Wake up Mangalore…or be damned!’ was published last year.

He is a mechanical engineer by qualification, a pianist by training and an environmentalist by calling. As an environmental campaigner he has organised and participated in numerous programmes aimed at preserving the once pristine environment of his home town Mangalore.

He is currently working on a new idea called ‘Tree Credits’, which he strongly believes will help solve climate change and at the same time fight poverty.

A writer by conviction, he only writes on subjects and causes that are close to his heart. He has written this book to present his friend and mentor, to the world, because he truly believes that Eric is bigger than Konkani and Mangalore, and that his life and achievements could inspire people similarly struggling around the world.