Rajeev Sane is a public intellectual from Maharashtra, India, who has created his distinctive mark through his lectures, articles and books in Marathi. At a young age, he started as a justice warrior, especially in workers’ movements. Later on, he realized that without advancement in Prosperity and Non-violence, Justice is going to remain far less than adequate. So his position is a pro-economic growth and against ‘Identity Politics’. His political-economic position is ‘market socialism’. He is a modernist (neither ‘pre’ nor ‘post’). He recognizes that Human rationality is inadequate but has been developing more and more on the whole. The occasional failures need not lead us to denying it. He welcomes new technologies with lessons learnt about its unintended consequences and also recognizes the democratizing influence of the communication revolution. He is an advocate of Spirituality without Religion. He especially opposes ascetic and withdrawal mentality in Indian tradition, which is evident in his modernist critique of Geeta, namely Nav-Parth-Hrudgat.

His academic qualifications in Engineering and Sociology are too narrow to indicate his interdisciplinary range and ability in identifying establishing/formulating interfaces among various disciplines. His pursuit is that of philosophical critique of ideologies and exposing the scandalizing subversive anti-development stances on all sorts of issues, through his policy advocacy articles. As he takes committed stands on issues and takes on attacks from adversaries, his arguments go on sharpening. He goes even in technical details of the issues in relevant branches of knowledge. He formulates new concepts and terms, matrices for cross-classification, flow diagrams and immaculate definitions as a creative theoretician. At the same time, he tries to build bridges for genuine dialogue between various antithetic views. He is one of the founder directors of the non-profit company Essence Seekers Foundation, which works for insightful education and interdisciplinary dialogues.

Beneath his extrovert public expressions, there lies a deep understanding of Philosophy, which is his first Love. He has availed informal training from philosophy stalwarts like Prof M.P. Rege. He is trained in Indian, Anglo-Saxon and Continental tradition (Kant to Habermas). He distinguishes knowledge at a prudent, pragmatic, normative and ethical level and a view of life at a spiritual level. His passion is a quest for universal ethics about which he hopes that not congruence but convergence is definitely possible, as over-arching issues before mankind become more and more global and urgent. He typically sees metaphysical and ontological questions in terms of what impact they leave on the ethical attitudes of the believers. He is deeply concerned about how humans can expand their maker-hood, enrich their becoming and learn to elegantly accept fortuity and other unavoidable human conditions.

He has earned State Awards for three books successively. He has created an audience of thinking minds who are astonished by his originality, sharpness and humble personality. His creativity also finds its way in compositions of lyrics and tunes in North Indian classical music. He has maintained serenity, a sense of humor and joyfulness despite his exploratory, unstable and turbulent life. 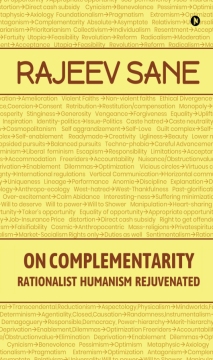 Philosophy has strayed away from its main task of clarifying proprieties of pursuits in human- life and has got caught up in methodology, logic and Linguistics. Too much hair-splitting is done about truth, knowledge, reality and language. Our main concerns should be Duty, Beauty, Piety and Complementarity. Substantial factors of fortuity and self-earned conditions are simply not considered in political philosophy.

Equality is too problematic to ta

Philosophy has strayed away from its main task of clarifying proprieties of pursuits in human- life and has got caught up in methodology, logic and Linguistics. Too much hair-splitting is done about truth, knowledge, reality and language. Our main concerns should be Duty, Beauty, Piety and Complementarity. Substantial factors of fortuity and self-earned conditions are simply not considered in political philosophy.

Equality is too problematic to take it as an ethical principle. Justice is being over-emphasized than Non-violence and Prosperity (almost in vain). The disaster of scientific socialism had its roots in Marxian theory itself. Antagonistic radicalisms including radical feminism are deepening the problems than solving them. Scientism (Materialist reductionism) is under-cutting the very sense of Responsibility! Existentialist and Post-Modernist traditions are leading to nowhere and only generating despair and sense of meaninglessness. Deep-Ecology is becoming Anthropo-phobic and blocking Human progress. Religious dogmatisms and fundamentalisms cannot be fought with by merely refuting truth-claims of their beliefs. A ‘non-supernatural’ spirituology will have to earn ‘therapeutic’ success over the clutches of religions.

Any pair of required factors ‘competing as well as complementary’ is a dialectical pair. Their balance has to be finely tuned and wisdom lies precisely there. One-sided thinking often destroys the balance and intensifies Evils. There is an eminent possibility of convergence towards universal humanist ethic and scope for common minimum program in spite of multitude of ethics.

In short, there is a possibility of a constructive, ameliorative and reconciliatory path for humanity at this juncture of human history.