Ganesan is presently based in the city of Mumbai, where he was born and raised.

Ever since his childhood, Ganesan had nurtured a deep passion for the arts and imaginative story-telling mainly in the form of sketches and short stories. As an avid film buff and fan of science-fiction thrillers such as The Jurassic Park, Blade Runner, Alien, Terminator and many such masterpieces, he had always yearned to develop stories set in extraordinary worlds that exist in parallel to our own universe.

The Hindu mythology is rich in literature covering the various metaphysical, spiritual and scientific aspects of not only our human world but also other dimensions and realms that we barely know about. It is the innate curiosity for such esoteric subjects which led Ganesan to tackle the monumental task of writing a story inspired by Hindu mythology.

As a writer, Ganesan is particularly interested in exploring the science-fiction, fantasy and techno-thriller themes revolving around superhuman extraterrestrials, lost civilizations and the vast ocean of Hindu mythology. Read More... 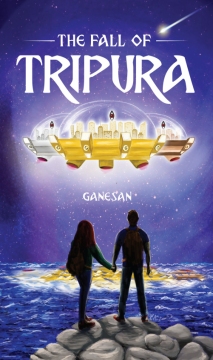 The Fall of Tripura

The Fall of Tripura weaves the magical threads of eighteen-year-old Nakul’s rollercoaster adventure as he accidentally resurrects a deadly civilization from India’s mystical past. This novel is infused with action, adventure and romance that drive its Science-Fiction and Mythological Fantasy based plot through the perils of an enchanting parallel universe.

The Fall of Tripura weaves the magical threads of eighteen-year-old Nakul’s rollercoaster adventure as he accidentally resurrects a deadly civilization from India’s mystical past. This novel is infused with action, adventure and romance that drive its Science-Fiction and Mythological Fantasy based plot through the perils of an enchanting parallel universe.


Nakul, a second generation Indian-American and Yale sophomore, had always harbored a fascination for India’s mythological origins replete with tales of exotic demigods and tyrannical demons who ruled the primordial subcontinent.


However, one fated academic expedition in the hallowed soils of Tibet would change Nakul’s life forever and effectively plunge the human world into a hellish abyss. Nakul discovers a relic whose lustrous veneer conceals a deadly curse to resurrect an ancient demonic race known as the Danavas who lord over the colossal three-city flying kingdom of Tripura. These prodigious titans of the legendary Atlantean lineage would stop at nothing to seize the earth and subjugate its racially inferior human inhabitants.


Nakul, as the fate anointed one, must plunge into the forbidden subterranean realm of the Danavas known as Atala to retrieve a celestial super-weapon that alone could annihilate Tripura. He must race against time in this seemingly impossible endeavor before Tripura’s rulers attain total invulnerability and unleash their unstoppable reign of terror over earth.