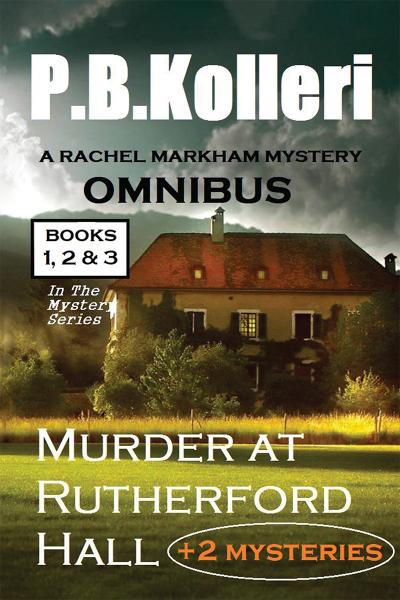 A Rachel Markham Mystery Books 1, 2 and 3

BOOK 1: MURDER AT RUTHERFORD HALL - Set in 1946 England, Murder at Rutherford Hall is a gripping tale that will have you turning pages till the end to figure out ‘whodunit’! The charming characters simply pull you in to a setting of elaborate richness woven with humour and portraits of a bygone era where homes were large and beautiful, people dressed for dinners and life moved with a certain grace for the privileged. Against this enchanting backdrop, love and betrayal, life and death, laughter and grief, wealth and poverty come together to provide an immensely entertaining read.

BOOK 2: MURDER AT RAVENROCK - Set in 1947, England, Murder at Ravenrock is an intriguing sequel to PB Kolleri’s first book, ‘Murder at Rutherford Hall. When a spate of baffling murders, rock the charming albeit sleepy town of Dartmouth, in Devon, Rachel and Jeremy, must go all out, to unravel the mysterious deaths, and unmask the ingenious criminal mind behind them.

BOOK 3: THE RIVERTON CASE - Set in 1947, England and India. Jeremy and Rachel set sail for Indian shores on the behest of a fabulously wealthy Indian Maharajah, to solve a case unlike anything they’ve encountered before. The journey takes them through the lives of Indian Royalty, and gives them a fascinating glimpse into the charmed life of British India,
towards the end of an Era of the British Raj to solve the baffling murder of a beautiful young English woman – Kitty Riverton who was found murdered in a marble folly, on the grounds of the magnificent Dharanpore Palace. They must also race against time to retrieve the spectacular Royal ruby necklace, ‘The Pride of Dharanpore’, which went missing, on the night of the murder. Their investigation takes them through the murky labyrinth of Palace intrigues and politics, where nothing is as it seems and motives abound.