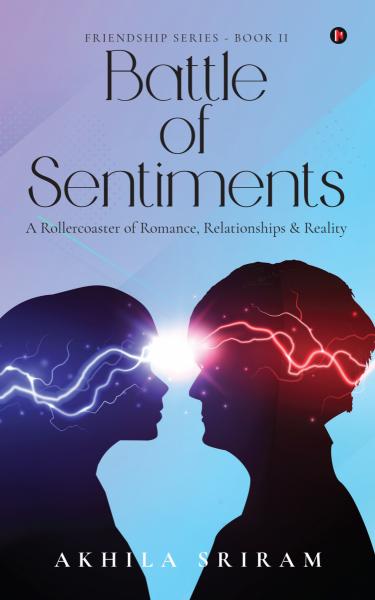 Battle of Sentiments A Rollercoaster of Romance, Relationships and Reality

Kalpana - An intelligent, strong-willed woman who lost her mother at 11. She adores her father, Narasimhan, and his every wish is her command. She agrees to marry a man of her father’s choice. Narasimhan is ecstatic until the bridegroom creates a rift.

Sridhar - A smart young police officer who is all set to marry Kalpana. Fate intervenes in the form of his cousin, Nithya, who, because of his past actions, is hell-bound on taking revenge on him.

Arjun Madhav - A charming and kind-hearted man who made a promise to himself when Kalpana’s mother lay lifeless that he would protect her. Will he, even at the cost of his happiness?

Gayathri - A bubbly young woman who is pressured to marry Arjun by her family when she is in love with Vikas.

Vikas - A family-oriented man who tolerates Gayathri because she is Veena’s sister. Will his undying devotion to Ranvir’s wife, Veena, create or solve the problem?

Shiva - Who is madly in love with his cousin, Nithya, who plays the villain in his brother’s life.

Their world is turned topsy-turvy by their own deeds and that of their family. Will they be able to find their love, satisfy their desires and discover happiness if they are stuck with each other?

Check out this atypical romance, a spicy Indian family drama that takes you on a roller-coaster ride of love and hatred, romance and revenge, and friendship and deception.

Akhila Sriram is a postgraduate in Nutrition and Dietetics. She practised as a registered dietitian for a few years and moved to freelance. Currently, she is Director-admin in a project management company, offering PMC services to hotels, hospitals and IT parks – a company founded by her husband, VS Sriram.

She is an avid reader, a foodie and a movie buff. She loves road trips; long drives kindle her imagination on different situations in life – some make-believe, some true. She often ponders on what-ifs and if onlys. This generates a wide range of story ideas in her mind, and so far, two have turned into novels. Her genre, typically, is Indian romance, involving the complexities of relationships within Indian families. She enjoys experimenting with her culinary skills at times to the delight or annoyance of her family. Akhila lives in Chennai, India along with her husband and two kids.