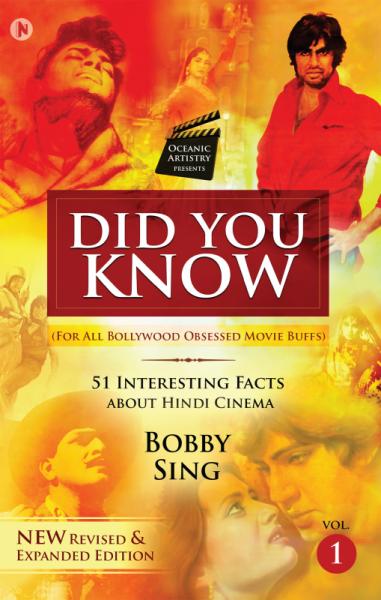 DID YOU KNOW - Vol.1 (New Revised and Expanded Edition) (For All Bollywood Obsessed Movie Buffs)

Do you eat, drink, sleep, think

Then we are already friends and sure going to have a great time together discovering many hidden and interesting facts about Hindi Cinema.

Facts that are not just two-line trivia but studied in depth along with other finer details about the subject.

•  The ageless Guide and its English version

•  A bold film suggesting castration for rapists in 1988

•  Utpal Dutt - not just a comedian

•  The two Hindi film songs that won the Grammy Award

•  The lost art of riddle-based songs in Hindi film music

•  Shocking Hindi films made on the subject of Incest

And if this all sounds interesting, then do give it a try as

Beginning his affair with Hindi cinema as a stage artist and later exploring other avenues as an educationist, poet and a graphic designer, the author is now an experienced creative-music consultant and a prolific writer on cinema, music and poetry – active in the field for the last two decades. Living and breathing cinema as a life-enriching passion, his latest reviews, verses and articles can regularly be accessed at his personal website devoted to these three forms of creative art, serving as the three essential elements of his life - as per his own words.

With the real name of Harpreet Singh, his everlasting relationship with cinema began from the moment he was given the nickname Bobby, inspired from the cult Raj Kapoor film with the same title released in the early ‘70s.