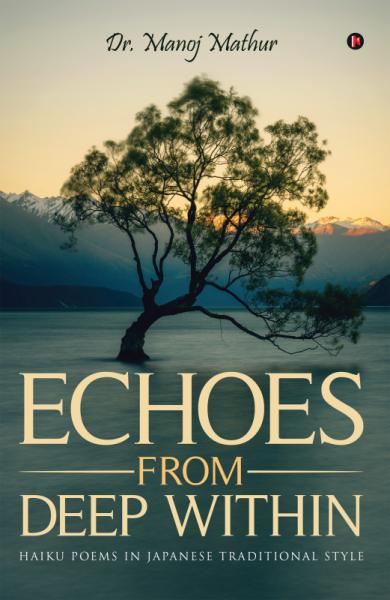 Echoes From Deep Within Haiku Poems in Japanese Traditional Style

Dr. Mathur’s Echoes From Deep Within ardently captures human emotions in the rhyme and rhythm of Haiku poetry. Whether it talks about the depths of love or the heights of ego, it emotes the journey of life influenced by anything from family and friends to love and politics through very simple three lines of Haiku.

So embark on this poetic exploration and start listening to the Echoes From Deep Within!

Poems that portray experiences, lessons and feelings in this journey called Life

Three lines that would bring out both suffering and blessings

This is – Echoes From Deep Within

I always thought that haiku were made of bamboo, that their rigid form of three lines and seventeen sounds forced our thoughts on fleeting life and changing seasons into a vessel that demanded that we measure the weight and value of what we wrote…

Full credit to Dr. Manoj Mathur for helping me see the world from the other end of the telescope, as well as for his affirmation that the form of this old Japanese poem can be stretched in many directions, as can its use…

In Dr. Mathur’s collection you will find haiku that fit the traditional definition of what one should be: a meditation on time passing and life-changing and fading, filtered through the metaphor of some kind of meditation on the seasons or a scene in nature… (Full text inside)

Author of “Haiku 61 Revisited: The songs of Bob Dylan, interpreted as haiku.”

(Bob Dylan is the Nobel Prize winner in Literature, 2016)

Dr. Manoj Mathur was born on February 27, 1936, at Ajmer, Rajasthan, India, but settled down in the picturesque city of Bhopal, Madhya Pradesh, India, where he now lives with his wife Veera and has three children – two daughters Tabassum, Shilpi and son Piyush.

Beginning his professional life as a medical Doctor, he dedicated all his time towards serving and betterment of humanity. He has had the honour to hold esteemed positions as Vice President of the International Federation of Red Cross & Red Crescent Societies (Geneva), as Secretary General of the Indian Red Cross Society, and also as Commissioner-in-Chief of the St. John’s Ambulance of India. Especially noteworthy is his enormous contribution to journalism as the Bureau Chief & National Correspondent for India’s largest-circulated English weekly “Blitz” for 35 years. He is currently Editor-in-Chief of the monthly magazine “Bare Truth”.

He writes poetry in English, Hindi and Urdu languages. His verse has attracted poets and admiring readers from all across the world. Three of his books of poetry have already been published; Life and Love (English), Kaal Hatheli Par (Hindi) and Kinaro Me Hai Zindagi (Urdu). This is his second collection of English Poems in the traditional Japanese Haiku style.