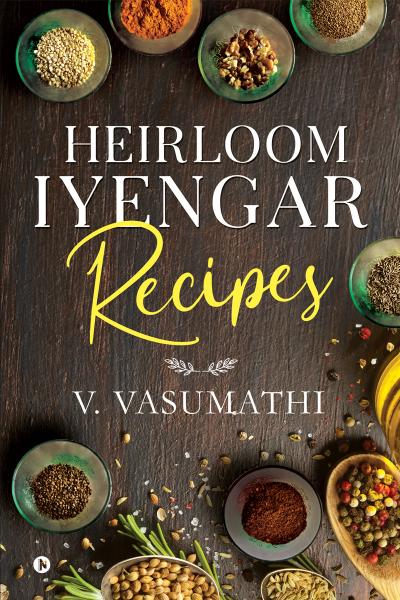 The first group is termed “Favourite Dishes” and although the items in this section were adopted by the Iyengar community a few hundred years ago, they were not part of the traditionally original recipes that have been in vogue for more than a thousand years.

The second group consists of “Jams, Halwas and Murabbas” that can be preserved for months.

The third group “Vadas, Papads and Sandige” consists of items processed and dried, with several months of shelf life.

The fourth group “Pickles and Pudis” are items that can be stored for a long time. Pickles are usually made from sour raw fruits and vegetables consumed even months after their yielding season. Pudis are masala powders consumed with rice/dosas/idlis etc.

Group five consists of varieties of “Dosas and Idlis” popularly served for breakfast.

Group six has different varieties of fried rice. Being relatively dry, they are suitable for carrying as lunch/dinner.

Group seven (final section) includes snacks specific to the community. All in all, although the book is not exhaustive, it covers many of the items traditionally exclusive to the community.

The author of the book, V. Vasumathi, was born to Smt. Mahalakshmi Sethuram and Dr. K.S. Sethuram on July 2, 1944, as their third child. She got her B.Sc. degree in the year 1960 and B.Ed. in the year 1962. Soon after, she joined a secondary school as a teacher for Science, Maths and English. Her interest in further studies didn’t stop even after she got settled. She holds a Master’s degree in mathematics, which she secured privately in the year 1980. She passed a certificate course in Computer C-language in the year 1990. She got married to Sri. S.T. Venkatadri, a scientist, in the year 1964. Although teaching was her profession, writing is her passion. On the school stage, the dramas played for the annual days would invariably be penned by her. She served for nearly 50 years as a teacher in different schools in Bengaluru, Secunderabad and Dubai. Before retirement in the year 2011, she served as Headmistress of a secondary school in Bengaluru for 21 years. She is blessed with a son and daughter, who are both Consultant Surgeons in the United Kingdom. She has three grandchildren with whom she likes to spend as much time as she can. She is well travelled and has visited many countries in the world. Reading and writing being her passionate hobbies all the way, she would like to impart and share her knowledge on various subjects.

Her systematic lifestyle and scientific thinking have brought many achievements to her credit both in the family and at work despite obstacles/hurdles she has had to face. She believes in dedication, sincerity and a cohesive family to maintain harmony and success.

She is fond of cooking and takes a lot of interest in preparing special dishes on festivals and other occasions.