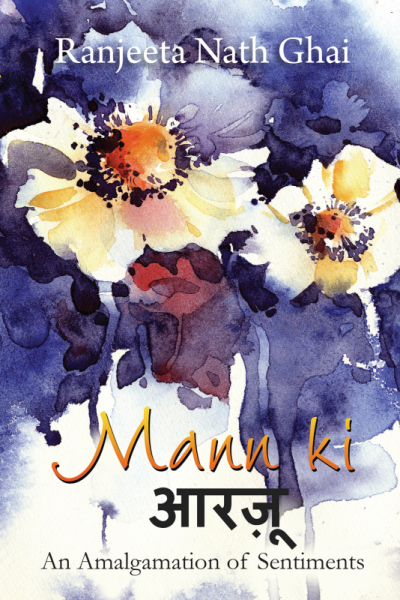 Is there anything that you can’t express? A feeling, a thought, a passion, a sentiment, an experience or a relationship? If so, this book will definitely connect with your finer sentiments. Most of us fail to express ourselves on a personal level. The depth of the feelings and intensity of these poems will leave you wanting for more.

This book, Mann ki Aarzoo written and packed with romance and rejection will touch a chord in your heart. The poet has penned down a plethora of feelings and experiences for you to read and enjoy.

Born to a Guajarati mother and an Assamese father(both AMC doctors), in Military Hospital, Agra Cantonment, Uttar Pradesh, brought up in New Delhi, and married to a Punjabi, Ranjeeta Nath Ghai has a rich cultural background. She is also an alumni of ‘The Army Public School, Dhaula Kuan.’ Mann ki Aarzoois Ranjeeta Nath’s debut attempt at publishing a few of her poems, which she has been writing since 1985. An army BRAT (Born Raised and Transferred) and an Army Officer’s wife, she has had the golden opportunity, denied to many, to have covered the length and breadth of India, seeing it all, in its splendor. Hardly has she ever lived in any state for more than a period of two years. She gave up her promising career as a graphic designer and built a parallel career as an educationist.

Ranjeeta’s life has been enriched by her seven furry buddies, who with their unconditional love have always been a de-stressing factor of her life, teaching her to value and love all of His creations.

A few of Ranjeeta’s poems – A Promise, As You Walk Away From Me, Tumse Nahin Main Khud Se Kahafa Hun, Ashk – have been published in the e-journal Research Inspiration.

“Life has treated me good and God has been kind to me. Looking back today I feel no regret as I have lived and celebrated each moment of my life with passion, on my own terms and conditions.”