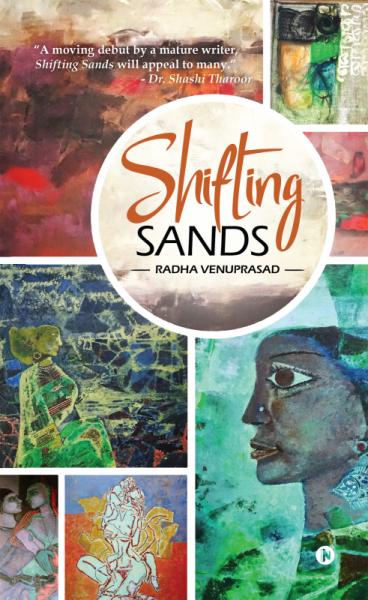 Shifting Sands is a collection of short stories about relationships — not only between men and women, but between families, extended families and even cultures. Most of the stories are rooted in the culture and traditions of the Nairs of Kerala, but any reader can identify with these well-told tales, because the building blocks of all relationships are universal.

Some of the life situations central to the stories may not be acknowledged, much less talked about, even in this ‘liberal’ age, but Radha Venuprasad discusses them frankly and with sensitivity.

All the stories revolve around strong people who are not afraid to be themselves. There is Renu, who decided to keep her love child. But at what price? There is Shiva, who, despite his commitment to his wife of many years and their children, found himself drawn towards and taking responsibility for a beleaguered young woman. Then there is Dhruva, an affluent, gifted doctor with a secret, Aruna, for whom the stars foretold a violent end, and Ammu, Markanday and Seema, whose lives intermingle and turn conventions upside-down. Read also about Anita, whose tragic past intrudes into her idyllic present, about Minikutty, a chip off the old block, and how Gopala Menon unwittingly sets off a chain of events that shake the very foundations of his ancient family when he lets a young writer live in a house on his sprawling premises.

Written in simple language, Shifting Sands is an easy read, and is sure to engage the interest of anyone who picks it up.

Born in Thiruvananthapuram, RadhaVenuprasad did her schooling at the Holy AngelsConvent and attended All Saints College. After her marriage to Venuprasad, the couple lived in various parts of India.

Always fond of visual art, Radha took to art restoration at the Madras Museum and trained at the National Museum in New Delhi to restore oil on canvas. She curated two successful art exhibitions where prominent South Indian contemporary artists were showcased.

A voracious reader, Shifting Sands, this collection of novellas, is Radha’s debut publication.
Radha is widely travelled. She and her husband are now settled in Chennai. They have two sons. These days, Radha best likes to describe herself as ‘grandmother to bubbly four-year-old Tara.’