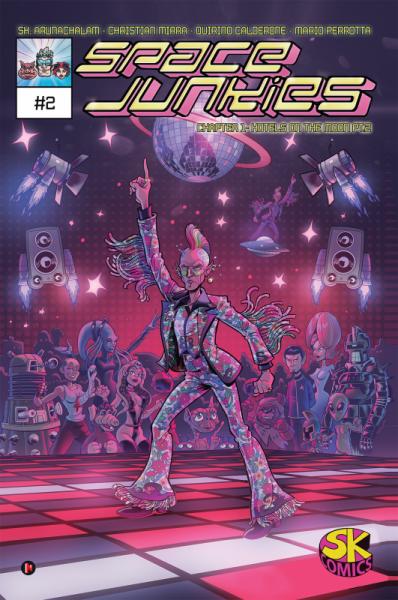 The Space Junkies continue their journey across the difficult terrain of Terra which prompts a great deal of complaining from Priest. Ggreed promises Puig that he can eat the whiny wimp once his usefulness has come to an end. The same deal was made concerning zany Luke.

While walking through the harsh and hot environment, Luke freaks out and removes his helmet, causing his head to explode. Ggreed wants to leave his corpse behind, but Priest insists he be carried along for a proper burial upon return. Puig is angry that he has been robbed of a meal!

Author/writer S.K. Arunachalam studied Visual Communications at Loyola, Chennai, and, after graduating in 2012, he pursued creative studies at the New York Film Academy. The knowledge and training gleaned from those efforts have led to various scripts, books and other works - the latest of which is the Space Junkies series.

S.K. Arunachalam created Space Junkies as a comical approach to the hit movie series Star Wars that leads readers on a fast-paced adventure through a galaxy "only a stone's throw away." The idea for the story evolved while Arunachalam was on a trip to Leh Ladakh, India. While stargazing one clear night, he began to question Chewbacca's loyalty to Han Solo and how the hairy sidekick might have begrudged Solo's authority over the years. That curious pondering of the question under the Milky Way sky led to the formation of characters Ggreed and Puig who, although pirating partners in obtaining ill-gotten gain, were engaged in a continuous struggle for dominance and control.

As the development of Space Junkies ensued, Arunachalam included such key ingredients as greed, lust, pride and betrayal that are the foundation of another popular show, The Game of Thrones. Other exciting elements have been skillfully woven into the story, such as magic potions, super powers, and hideous creatures that give the tale an extra kick of adventure.

In order to bring the Space Junkies to life, S.K. Arunachalam teamed up with skilled penciller/colorist Christian Mirraand inker/colorist Quirino Calderone of SmArt Studio. The result is a captivating tale that has been professionally illustrated and promises to wow its audience.