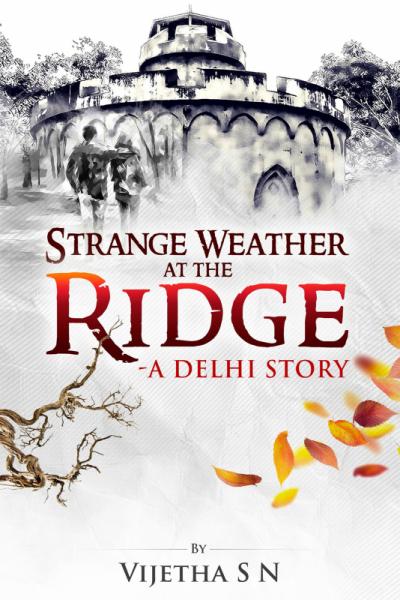 Strange Weather at the Ridge A Delhi Story

Captain James Montgomery, a British soldier in India, is lost in a forest trying to come to terms with the aftermath of the bloody revolution of 1857, when he has the strangest encounter with a bewitching woman, leaving him oddly shattered.

More than a century later, Professor Singh, known for his strange public views on the occult goes missing. The last person to see him claims that the professor disappeared into thin air.

Sita and Aron, two young journalists, are tasked with finding the truth by their over-zealous boss. Buried secrets and forgotten demons emerge, when they come across an old journal that may hold the clue to Prof. Singh’s disappearance. The frayed journal is the account of an English soldier, Captain Montgomery whose life takes the strangest turns. Is it the rantings of a mad- man or is it a true account holding the key to Prof. Singh’s disappearance? The journal has so far been in the hands of Prof. Singh’s favourite student – Prof. Mukul Phadnis who too has secrets to hide. Each must fight their own demons as they unconsciously get engulfed in a web of love, betrayal and terror that is part of Captain Montgomery’s life.

He eventually rediscovers the magic that went missing from his life. But, does this magic come at a price for Aron, Sita and Mukul?

Vijetha S. N. is a journalist who has written for The Hindu on a range of topics right from university politics, sensational legal issues and crime to what the debonair Delhiite should be wearing. She lived in Delhi for close to five years, an experience that changed her so completely that she could not but, write a book based in the Capital. This is her first literary effort. She recently moved to Bengaluru, her hometown and continues to work for The Hindu, reporting on issues that plague the city. However, a piece of her heart shall always remain in that most beloved of Capitals—Delhi.