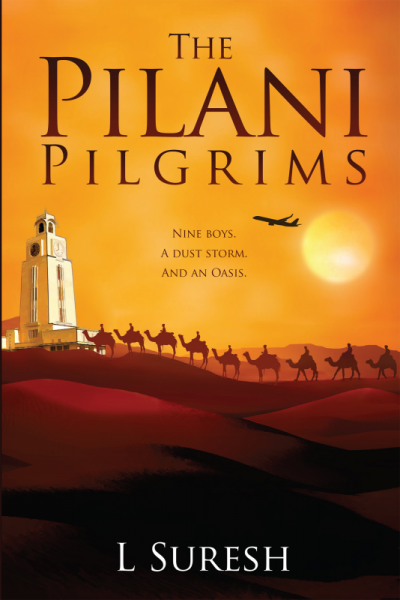 Some journeys take you back to where you began…

Nine guys – the Pilani Pilgrims - take off on their first reunion trip to BITS Pilani, 18 years after they have passed out. However, only one of them knows that there’s a hidden agenda in this desert safari…

Hours before Maitreyee starts off on her 32-hour train journey to become a BITSian, she discovers a secret that has remained hidden in her family for the past two decades - a book with letters written to her Mom by a man named Joe.

Where did he vanish all of a sudden?

Why do the nine guys choose hot, hot July to have a reunion on campus?

What is the hidden motive behind their meeting?

How does Maitreyee come to terms with her unexpected discovery?

A treasure chest of memories is opened as a series of mails sweeps everyone off their feet and takes them on an unforgettable journey to the land where the past is going to come face to face with the future.

As for the answers to the questions above, they can be found at the place where it all began - BITS Pilani.

“To take something that is close to your heart and to entwine it with something that is part of your very DNA – that’s storytelling at its most honest form. This is what Suresh has done with The Pilani Pilgrims. As you embark on this refreshing narrative, you cannot help but relive the past and look at it with wonder,nostalgia…and an undeniable sense of wistfulness. It’s never too late to be a teenager… but if you don’t subscribe to that theory, your next best bet would be to pick up this book and allow it to transport you to when you were."

entrepreneur and a BITSian to the core

What happens when a Civil Engineer, a CAD-CAM Sales Executive, an advertising copywriter, a multimedia Project Manager, an event management consultant and a column writer in a newspaper come together to plan out someone’s future? Worse still, what happens when they all happen to be the same person and it is his future that’s being planned? When he manages to escape this schizo nuthouse, L Suresh plans to write a book on his predicament and inflict more pain on this already suffering world. In the meantime, he plans to write other books based on his saner experiences and observations. And to ensure that he has no way out from this goal, he has currently taken a sabbatical from work and is in hiding from all his other personae.