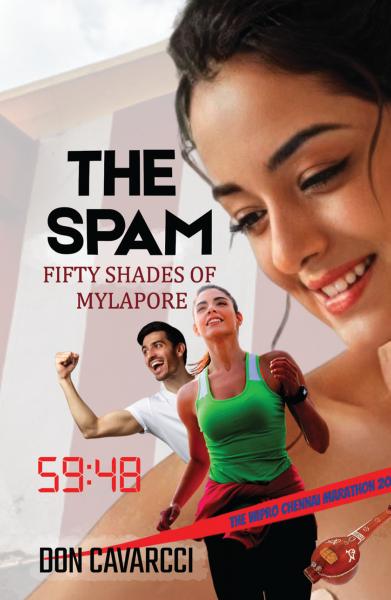 THE SPAM FIFTY SHADES OF MYLAPORE

Jig, a young Carnatic musician, trapped in a loveless, unconsummated marriage is also serious about his other passion, long distance running, which provides him an outlet for his frustration at the way life has turned out for him.

Succour comes puffing his way when Ketaki, the brazen, devil-may-care Odissi danseuse next door,  approaches him to coach her teenage daughter for the annual Chennai Marathon.

This triggers a series  of incidents which lead to a flash point in Jig’s relationship with his wife but also  stoke Ketaki’s sympathy and passionate feelings for him.

Will he now find the courage to throw off the shackles of his marital prison and  escape to freedom ?

Don Cavarcci works for a multilateral institution by day and is a cartoonist by night. He’s a classical music afficionado, both Western and  Carnatic, and made Chennai his permanent home since 2001. He lives in an apartment on the East Coast Road with his wife and kid aged 23 years old. In the  Chennai Marathon, 2014 edition  - 10 Km category -  with close to 7000 participants, he was the only runner ABOVE the age of 45 to go BELOW the 45 minute mark for the distance and was placed 13th overall.