Born in the Steel City of Jamshedpur, Niroop Mahanty was educated in Jamshedpur, Delhi, and the US.

A successful member of the top management team in one of India’s largest and most respected blue chips, he quit his job prior to retirement age to “pursue my passions and spend more time with my best friend, my wife. Rupa” In fact, he joined his wife’s consulting firm as her deputy!

A highly qualified pilot, with multi-engine and instrument ratings, he is the only Indian civilian to be trained, tested and licensed to fly a military jet. He is also a scuba diver certified to ‘Advanced’ level, a free fall skydiver, a blue belt in Tae Kwon Do. Niroop is also an active Reiki healer and sings and plays guitar in a Rock band,

Passionate about the need to return to society, the Mahantys run two charitable trusts from their own finances, www.kmcotrust. com and www.kmceotrust.com.

Niroop contested the Parliamentary election in 2014 as an all-expense paid “invited” candidate and came in at a creditable third position. He says he has “no further political ambitions!” 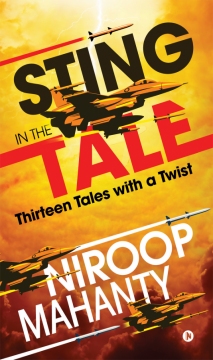 Sting in the Tale

"There are enchanting twists at the end of every story in this book. After you’ve read a few you try and guess what happens towards the end of those that follow. You are wrong every time."

Sting in the Tale is a collection of thirteen stories with a twist at the end of each story. Here’s what readers have to say about it.

"There are enchanting twists at the end of every story in this book. After you’ve read a few you try and guess what happens towards the end of those that follow. You are wrong every time."

Sting in the Tale is a collection of thirteen stories with a twist at the end of each story. Here’s what readers have to say about it.

“STING IN THE TALE is truly a magnificent collection of tales covering so wide a range of subjects. The spread is superbly varied and gripping in detail. I, for one, couldn’t stop reading once I began.” Genl (retd) Prem Sabherwal.

“The plot of each story in “Sting in the Tale” leaves readers guessing what comes in the end……stories such as ‘August,’ ‘Village Inc,’ ‘An honorable alternative’ and several others are racy crime stories with lots of twists.” Animesh Bisoi, The Telegraph.

“I am savoring the stories-but am not rushing through as they are like good Champagne, to be sipped slowly. The twists, in the end, are great, the one about the morning conversation in Paris left one gasping.” Indira Kaczynska. Freelancer, Geneva

“I took my time reading your manuscript of “Sting in the Tale,” and I have to say ‘I loved it’ It appears to me that almost each tale has the potential of actually being a prelude to a full-length book by itself” Pradeep Verma, Educationist, Reston, Virginia, USA.

“Not since The Da Vinci Code have I read any book from cover to cover. Very readable and for the likes of us living abroad it makes a very nostalgic reading.” Anwar Hasan, Retired MD, Tata Ltd. London

“Just to let you know I have thoroughly enjoyed ‘Sting in the Tale’ which reminded me of Jeffry Archer’s ‘A Quiver Full of Arrows” written in the Indian context.” Jayanta Bannerjee. Executive and informal critic.