Rafiya was born in a poor Indian Muslim family at Birgaon near Raipur, Chhattisgarh. With a family comprising maternal Grandmother, a Father who is an Industrial labourer, Mother a housewife and two younger siblings.

When she was just 14, her parents as to avoid dowry, married her to a person who was twice her age. Soon she became mother by the age of 15.Despite of marriage she had to stay at her parent’s house as her husband was not able to afford a house being a Truck Driver. The parents financial and social discomfort with her family’s overstay lead to channel her entire efforts to make a shelter and a living for herself and her children.

Soon she was left by her husband and was solely exposed to the real hardships of life. As she realized the importance of education to stabilize her life and with her zero years of schooling erstwhile, at the age of 27 she self-vowed to educate herself. With her children and sibling’s help she cleared Class 10th via open school examination and later within two years, by the age of 27, she was through Higher Secondary. On side she had to rigorously work as a Real State Broker to earn food, clothes and school her children.

The contribution of Harish Bhai Hindustani locally known as “Guruji”, the principal of the Ma Banjari Gurukul School at Birgaon, renowned for his various social aid, awareness and welfare initiatives, has been crucial for Rafiya as she battled her way to a better life. He encouraged her to pursue education and later for her autobiography. Her younger brother and sister, Imran and Sultana were the anchors of her life, despite their own hardship of employment and stability they were always there for her.

After a long journey in darkness of misery and helplessness, Rafiya have founded a new mission and meaning in life, working along various ‘Self Help Groups’ and ‘Charitable Organization’, she has dedicated her life to help others who are in similar situation. Now settled in a small but peaceful rented apartment in the suburbs of Raipur City, she says that ‘her story of life has just started! 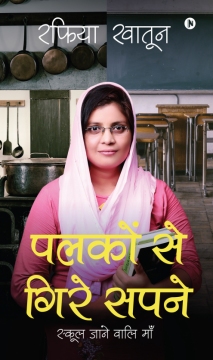