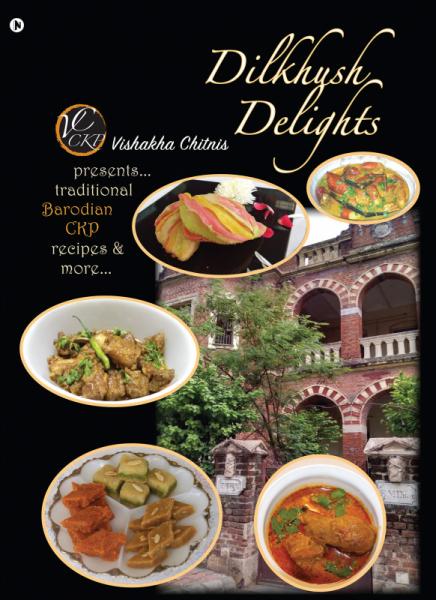 Barodian CKP cuisine – hearty, lip-smacking and totally unforgettable. A delightful collection of vegetarian and non-vegetarian dishes – this is essentially the Baroda branch of CKP cooking, which features a lot of fresh coconut, with spices that are delicate and not as fiery as its southern counterparts. Many of these recipes have been jealously protected, handed down from generation to generation within the family and have been the pride of discerning hostesses who took great joy in presenting them to their guests.

An educationist by profession and a foodie at heart – that best describes the author, Vishakha Chitnis. She grew up in a red brick bungalow called Dilkhush. Gracious, welcoming with an old-world charm, it was where she first tasted the delicacies featured in this book. At that point, her interest in the food was only in eating. It was only later, when she grew up and had a family of her own that she began to appreciate the nuances of this particular culture of cooking.

She belonged to a large joint family – where her grandmother guided them with a firm but loving hand. Her mother was an extremely good cook and has passed on her skill to her daughters.

For the family, festivals played an important role in their lives – each with its own set of dishes. And so there were plenty of special dishes that would be made through the year.

After marriage, she had to move away from the family. To be able to reproduce traditional meals for her family she started writing down the recipes that she culled from her grandmother and her mother. For a long time, these remained in her own cook-book, used when time permitted and the children demanded. It was only recently that she felt that they need to be shared with others to keep this cuisine alive. Friends and relative who had tasted these dishes at ‘Dilkhush’ too felt that many of these recipes would be lost if they were not published in print.

This book includes everyday fare along with special dishes, with tips for next-generation beginners.

These recipes have guided Vishakha’s culinary journey for over 40 years. They will surely help many more.