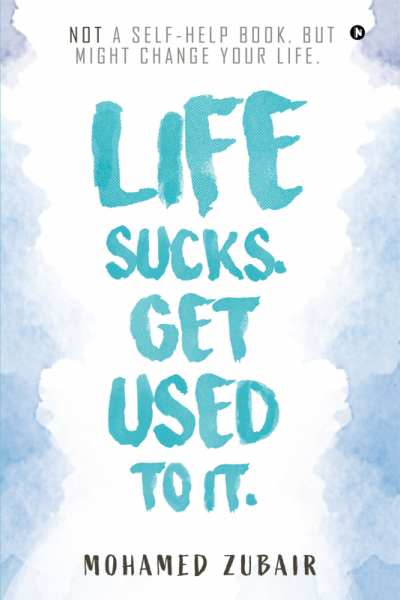 Life Sucks. Get Used To It. NOT a Self-Help Book. But Might Change your Life.

We live in strange times. Most of us hate our jobs, our parents are sending us friend requests on Facebook, and Memes are the only form of entertainment that truly make us happy.

Life sucks; get used to it is India’s first Anti-Self-Help book!

While regular self-help books want to look into your eyes, hold your hand and tell you that the universe is waiting to reward you in beautiful ways, Life sucks; get used to it is more like a spank on the bottom that encourages you to accept the harsh realities of life, with some tough love, of course.

This BS-free and no-nonsense handbook provides you with actionable tools you can use to bring about a change in your life. Somewhere among the brutal truths, life lessons, humorous puns, profound sarcasm and profanity-laden thoughts, you might just end up finding the answer to living your best life and making your place in this big, bad world.

Mohamed Zubair is a Paradox.

He considers himself an opportunist but is reluctant and reclusive.

He has often found himself to be an optimist but lives life with a certain degree of cynicism.

He finds it pretentious to write an author bio in the third person but wrote this anyway.

If an Indian aunty happens to ask what he does, you might say that he works as a content writer, marketing consultant, and more recently, as a life coach with a unique approach.

Zubair is firm that the only thing Humans can know with certainty is the fact that Dosas taste better than idlis, and remains adamant that he’ll never reveal how he truly feels about Vadas.

‘Life Sucks; get used to it’ is his debut book.