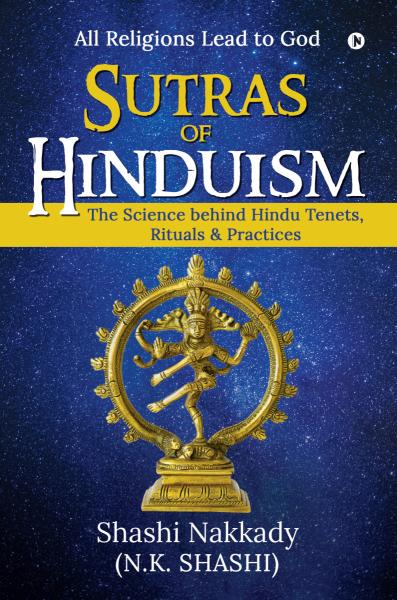 Sutras of Hinduism The Science behind Hindu Tenets, Rituals & Practices

·       The Origin of Life According to Hinduism

·       The Science Behind Location of Hindu temples or ‘Argashastra’

·       Hindu Technology Behind Nuclear Testing and Rockets to Outer Space

At the outset, I must tell the readers that this is not a work to propagate the Hindu religion, but to explain the Hindu culture as it existed in India before the advent of all other religions of the world. The origin of almost all tenets and beliefs mentioned predates the religions of the Abrahamic faith and its establishment in India, and it is for this reason, I felt it is more accurate to call it ‘Hindu Sutras’ rather than ‘Indian Sutras’ although the two constantly overlap. Indians practicing other faiths should consider it an inheritance or, more appropriately phrased, a genetic endowment.

I am an agnostic Indian who wishes to abide by the culture of Hinduism.

My initial interest was journalism and writing, but after having read books like Reach for the Sky and Paul Brickhill's books, my interest shifted to fighter piloting. I joined the National Defence Academy, Khadakvasla, as an Air Force cadet. But two years later, I was adjudged unfit for flying due to eyesight reasons during a medical examination. That disillusioned me, and I eventually had to leave the Academy. I went into civilian flying and got a pilot’s licence, but in that day and age, employment was near impossible. A friend gave me a job at a tea manufacturing company, and I embarked on an exquisite, tea-tasting-related career, which I continued until retirement. Presently, I am an export consultant for a few tea manufacturing companies.