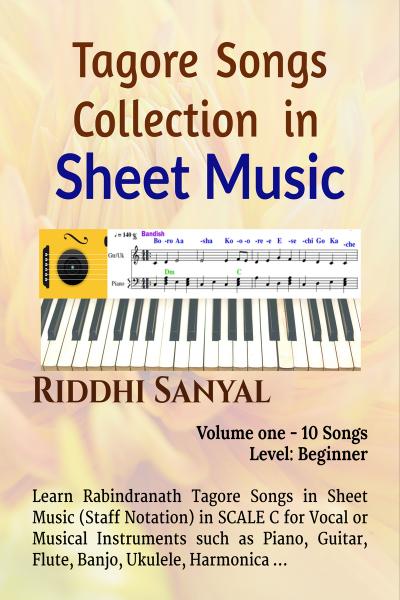 The book contains Sheet Music (Staff Notation) for 10 selected songs for Beginner level at Scale C. The original Lyrics is provided on each notes. They songs are ordered in such a way that learner will be benefited to get a chance to start on Rabindra Sangeet / Tagore songs. So the idea is to provide an opportunity to read the sheet music, listen the music file, learn the Tagore songs and finally sing or play in your favorite instruments – Piano, Guitar, Flute, Ukulele, Banjo, Harmonica or any C Scaled instruments. Chords are provided in addition to Bass Clef.

The Book contains the staff notes of the following songs -

Please provide your valuable feedback that will help me to correct in the next version and write Volume 2 on Tagore Songs.
Author Page: https://www.amazon.com/author/riddhi
Youtube Channel: https://www.youtube.com/c/musicaljourneys

Riddhi has been in the music industry for more than 20 years. Apart from Flute, he plays Synthesizer, Guitar, Ukulele, Harmonica, Melodica & Tabla. His musical journey starts from childhood. His mother, Smt. Gargi Sanyal is a well-known Rabindra Sangeet singer and learnt from Legendary Suchitra Mitra at Rabithirtha. Grandmother, Smt Tripti Saraswati was a classical singer and had taken coaching to Pt. Jamini Ganguly and Legendary Sri Manabendra Mukherjee. Sister, Smt Madhupa Sanyalis vocalist and had learnt advanced lessons from Pt. Ajay Chakraborty at Shrutinandan. Musical gathering is common at home and sometimes everyone is deeply tuned into music, that even time passes from evening to late night on those homely musical occasions.

During childhood, Riddhi has learned Tabla from famous teacher Sri Abhijit Barhouri at Malda. During those days, famous singer & Harmonium maestro, Sri Alok Bhadhury, used to come at our home at teach music. During his college life, Riddhi has started to learn Flute from his friend Sri Sajal Banerjee. Later on Riddhi has learned to play the Bamboo flute by self-practicing and performed in the college functions. During staying at USA (2007 – 2010), studying at various library at Minneapolis, he has learnt sheet music. He has performed at US, at the Minneapolis during Durga Puja festival organized by BAM. He played Rabindra Sangeet and North Eastern Bhatiali Music. Feedback received after function - "It's rare to have Indian flute / Bansuri in the US functions and it was awesome to listen to the Indian & North Eastern tunes".

Flute For Everyone is one of his famous Book, is designed in such a way that, readers will be able to start in Flute / Bansuri, learn to play prelims, songs and gain interest in Classical Music. The Book on Tagore Songs Collection in Sheet Music will h