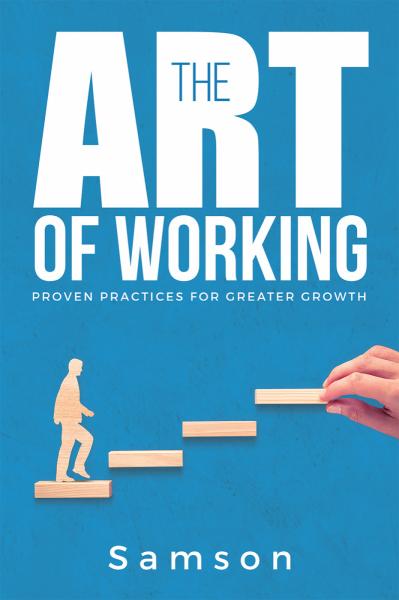 The Art of Working Proven Practices for Greater Growth

Written for all professions, The Art of Working is a recipe for growth at work – with timeless practices and an understanding of the true concept of work. The real life stories, easy-to-use action steps, and the Ideal Growth Personality model will bring positive change in personal work habits and a desire for growth.

• You will learn the Basics of Work:

What is Work? Why Work? What Work does for you? Answers to these questions will change your perspective and boost your confidence towards your growth

• The Ideal Growth Personality will improve the missing link and make you Growth-worthy at all times.

The Art of Working has the potential to turn around your Work Personality and improve your Growth Trend drastically.

SAMSON is founder and president of SmarterYou, a personal development-training firm whose mission is to help people improve the quality of lives. Before his entrepreneurial journey, Samson worked with corporates for over 10 years; the longest stay was with IBM.

During Samson’s corporate journey he constantly grew to various positions and departments, which made him wonder why he was growing constantly and his fellow colleagues weren’t, even though they were smarter than him. He began to study himself and other successful people, which gave him the answers to why and how he continued to grow.

Samson began teaching others his technique and they began to succeed and grow also. The results gave birth to SmarterYou, a company, which supports others in realizing they are smarter than they think they are. SmarterYou supports you in reaching your higher potential.

As a Speaker, teacher and coach, Samson has worked with corporations, startups, and universities. He is an international speaker and is mentored by the world’s best success teacher, Bob Proctor and Mary Morrissey. He hosts public workshops, attended by hundreds of people from various profession.

To learn more about Samson, and the services offered by SmarterYou, please visit www.smarteryou.in