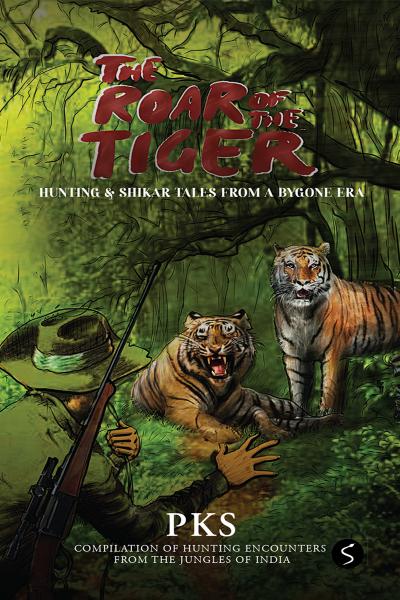 This is a compilation of hunting tales from the jungles of India from the centuries gone by.

“…We have no word in English that properly embraces all this, but all are expressed by the Persian word ‘shikar!’…”

“…Sitting on the ground in a thorn “Boma” for a lion in Africa is considered an ordinary enough thing to do; but sitting on the ground for a tiger in dense jungles of the Indian subcontinent can be an entirely different experience. The risk inherent should be obvious to all. Sitting on a machan built on a tree was the more common approach employed by Tiger hunters of yore; but of course, there were exceptions...”

“…In another moment the old Panther sprang out of the jungle, made a pat at the kid, and then crouched by its side. If there had been more space, I should have waited and watched the Panther’s proceedings, but as I was afraid that she would drag the goat into the jungle, I fired at once, and immediately jumped up so as to see above the smoke. The Panther sprang into the air, fell backwards, and then disappeared among the bushes…”

“…I was standing at the junction of two pathways, and the beat had approached to within a hundred yards, when I heard “Woof! Woof!” I imagined the beaters had started up a big wild boar. The “woofing” was repeated during the next minute, coming closer each time, until finally there was a resounding “Woof” in the tall grass about fifteen yards in front of me. By this time I was standing on tip-toe, trying to peer into the grass ahead of me, when suddenly I realized that what I was staring at behind an ant-heap was the tail-end of a tiger…”

The stories in this collection are extracted from rare works from the 17th, 18th, 19th centuries.

Because of the nature of his father’s job, the author grew up traveling the world with his parents and brother; he lived and studied in several different countries and cultures around the world - including Venezuela, Bahrain, Sri Lanka, Madagascar, and India. This upbringing has instilled in the author a hard-to-slake desire to be constantly on the move and to seek out, explore and live in an immersive way amongst unknown peoples and cultures.

All through his life – and in all the countries he has lived in – he has seeked out adventure in the wilderness: the jungles and forests of India, South America and Africa, the rough mountainous terrains across continents, and the deserts of the Middle East. Beyond the flora and fauna of these varied geographies; PKS has always had a keen interest and desire to mingle deep amidst the cultures and peoples in those regions, to understand their customs and ways.

PKS’ first book was ‘The Call of the Mountains: Tales, Reminiscences, Encounters & Anecdotes’, also published by Sidewinder and Notion Press.

By trade, PKS is an equities’ analyst at an investment bank, but he considers himself a professional Nomad and Anthropologist at heart. After a decade of professional work in Hong Kong and New York – and extensive travel in China and Southeast Asia during that period - PKS now lives in Mumbai, India with his wife; and from there he continues to constantly plan new mountain and jungle escapades...