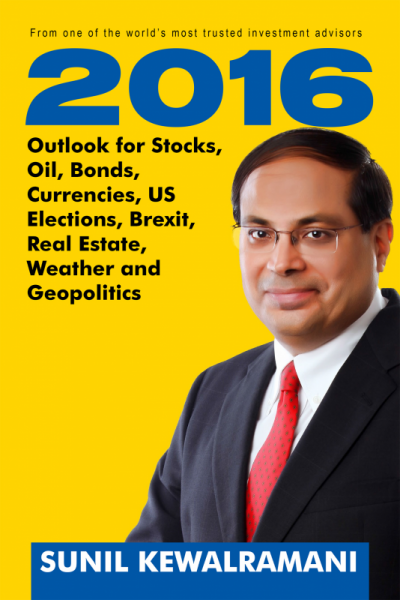 Sunil Kewalramani predicts a sharply down year for stocks in 2016 in his book 2016 Outlook for Stocks, Oil, Bonds, Currencies, US Elections, Brexit, Real Estate, Weather and Geopolitics.

Some of his predictions include:

1.The Fed will reduce, rather than raise, interest rates in 2016.

2.Gold should outperform other asset classes in a negative interest rate environment.

3.Steep decline in oil prices between 11th March and 29th June 2016 will be followed by steep rise between 29th June and 24th August 2016 and another steep decline thereafter.

5.A major drought on the one hand and unseasonal rains and storms on the other hand will badly affect agricultural crops in USA, Asia (including India) and Africa in 2016 leading to food inflation.

6.Rebound in equities in the last week of June and first half of July 2016 but a sharply negative note thereafter as Global Recession assumes center stage in 2016.

7.Terrorist attacks and Geo-political tensions will keep the governments and investors on edge till August 2016.

Sunil Kewalramani is a professional money manager and has advised and consulted for MNCs, Institutional Investors, Mutual Funds, Pension Funds and HNIs (High Net Worth Individuals) in various parts of the world.

Sunil Kewalramani is an MBA from the Wharton Business School, USA; a CPA (Certified Public Accountant) from USA; Chartered Accountant from India and holds Master’s Degrees in Law and Accounting from the University of Mumbai.

He is the Chief Investment Officer of Global Money Investor, a professional money management company with over $ 915 Million under management.

Sunil Kewalramani is a much sought after international speaker at conferences and has taught at leading management schools around the world. Mr Kewalramani also conducts seminars and workshops on Business Strategy, Strategic Outlook and Money Management for Investment Banks and Multinational Companies across the globe.